Nikeah is a town in Final Fantasy VI. It is a port city located at the north end of the Serpent Trench and the mouth of the Lethe River. It has a large marketplace, and its shops are street vendors standing among the crates of goods in the port. Ships sail regularly between Nikeah and South Figaro and later in the game, the player can choose to board ferries from Nikeah to South Figaro and back as they wish.

Sabin, Cyan, and Gau surface in Nikeah's ports after swimming through the Serpent Trench from Mobliz. The three board a ship bound to South Figaro to get to Narshe. If the party enters Nikeah's pub, a dancer will flirt with Cyan, making him uncomfortable.

In the World of Ruin, Nikeah hasn't changed much: it still has a thriving marketplace, and runs ferries to South Figaro. Celes and Sabin come here searching for their friends and meet Gerad, a man who resembles Edgar who leads the Crimson Robbers. Gerad and the robbers depart on a ferry to South Figaro with the two in pursuit.

In the GBA and following versions, as soon as the party arrives at Nikeah in the World of Ruin a former Returner will recognize the party and claim that prior to their infiltration to the Magitek Research Facility four espers had escaped, and that they could help the party in their journey. Considering the man's absence in the original versions he most likely refers to the four espers introduced in the GBA version: Leviathan, Diabolos, Gigantuar, and Gilgamesh.

In the Advance, mobile and Steam releases, after speaking to a man in South Figaro near the chocobo stable who mentions seeing a shadow while fishing, boarding the ferry in either direction will cause Leviathan to attack the ship once the party has acquired the Falcon. Defeating him earns the party the Leviathan magicite.

For monsters encountered in the World of Ruin, see Serpent Trench

"Kids Run Through the City" is Nikeah's background theme in the World of Balance.

"Under Martial Law" is Nikeah's background theme in the World of Ruin.

Nikeah on the world map in the World of Ruin (GBA). 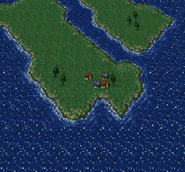 Nikeah on the World of Balance map (SNES). 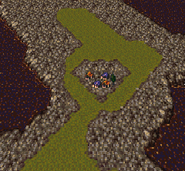 Nikeah in the World of Ruin (SNES). 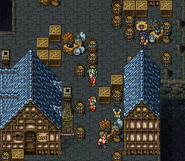 The port of Nikeah (SNES).
Add a photo to this gallery

Nikeah is probably based on Nicaea. It was the original Greek settlement name for what are now the modern cities of İznik, Turkey and Nice, France.