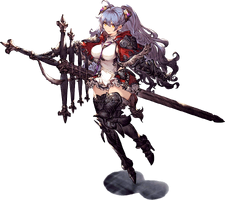 The Nightblade (ナイトブレード, Naitoburēdo?) is a recurring job in the series, exclusively appearing in the tactical role-playing titles. The job is a variant of the Knight that makes use of their swords to lower the stats of enemies in some fashion.

The Nightblade originally appeared as a high-leveled class for the character Hawkeye from Trials of Mana.

The Nightblade, originally localized as Knight Blade, is an enemy exclusive job for Isilud Tengille during the single boss encounter with him. It is an improved version of the Knight job, while also having traits of the Dragoon job as secondary action ability.

The Nightblade appears as the unique job of Elsirelle and Velric. The job gives a character access to the Nightblade command, which includes a variety of debuffing slash attacks and buffing abilities to raise the party's resistances to weapon attributes.

Characters with access to the Nightblade as a secondary job include; Cloud, Corwell, Mont, King of Leonis, and 9S.

The Nightblade is a recurring class in the Mana series, appearing in Trials, Sword, and Heroes of Mana as a variation of the Thief class by its Dark-Dark path. Its appearance in Trials of Mana serves as the job's original appearance, being a high leveled class available at level 38 for Hawkeye should he progress as a Ninja in his first class change, and as a high level enemy in late parts of the game.

The Nightblade class specializes in major offensive trickery, from harassing foes from afar with status effect inflicting jutsu spells gained and inspired from its prior Ninja class.