There have always been many raksas, what you call fiends, in Lhusu, held at bay by a paling. But, the paling has fallen. No...it seems rather that some murkha has broken it! And now something most terrible has come out. Yes, a nidhogg, previously sleeping deep within the mines has come to the surface! It is even beyond us parivir guards to defeat it.

Nidhogg is a mark in Final Fantasy XII and the fifth mark to be listed in the Clan Primer. It is arguably the toughest Rank I mark. The hunt becomes available after Vaan has masqueraded as Basch in Bhujerba, and the party has been given permission to enter Marquis Ondore's estate. Nidhogg is found in the Transitway 1 area of the Lhusu Mines, and the petitioner is conveniently located right at the mines' entrance.

Formerly living in the Depths of the Lhusu Mines, this Creature was ousted from its Lair after it was defeated by an Antlion in a Squabble over Territory. Of late, this Nidhogg has appeared near the Collection Area, where it pesters and annoys the Mine Workers. It was one of these sorely harassed Folks who posted a Bill for this Mark.

Nidhogg's Poison attacks can be dangerous. All of its attacks are physical. Nidhogg will use Saber when it loses a considerable amount of HP to double its Attack Power. It uses Tail Spear when its HP is depleted by 80%. When Nidhogg is at HP Critical health it chains its attacks and is very fast. It will always attack the nearest target.

Having Antidotes ready is advisable. Magick, such as Immobilize, Blind, and Slow, will greatly help. Protect is also recommended.

The party can use a character or two with ranged weapons to conveniently stay out of Nidhogg's range. When attacking it close-range, the character should be equipped with a shield and having learned some Shield Lores on the License Board helps.

The player may also Lure a character equipped with a long ranged weapon and then cast Immobilize on Nidhogg.

The player will also receive a Great Serpentskin after the battle, which can be given to Dantro's wife as part of the Patient in the Desert sidequest. 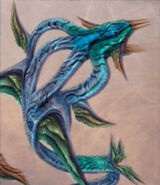 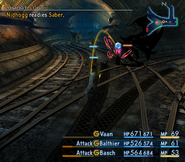 [view · edit · purge]The Níðhöggr (meaning "malice striker" in Old Norse, commonly anglicized as "Nidhogg") is a dragon in Norse mythology who would eat the roots of Yggdrasil, the world tree.