"New World" (ニュー・ワールド, Nyū Wārudo?) is the main theme for the Japanese Xbox 360 and western releases of Final Fantasy XIII-2. It was sung by Jake Zyrus and is the second track of Jake's Infinity album. It was composed by Koichi Tabo of Superfly and arranged by Akimitsu Homma, with the lyrics written by Hiroshi Yamada (jam). 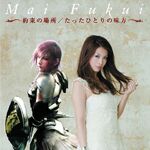 "Yakusoku no Basho" (約束の場所, Yakusoku no Basho?, lit. The Promised Place) is the Japanese counterpart of "New World" with a slightly different arrangement for the Japanese PlayStation 3 release. It was sung by Mai Fukui, composed by Koichi Tabo, and arranged by Yohey Tsukasaki. The lyrics were also written by Hiroshi Yamada under the alias jam.

The Yakusoku no Basho single was released on November 23rd, 2011 in Japan. A standard and limited editions are available, the limited edition containing a DLC code for Final Fantasy XIII-2. The code can be used to download "Gift from the Songstress", a set that includes Diva Mic and Diva Headphone accessories.

The track was also included on Mai Fukui's six-track mini-album, entitled Beautiful Days, as was the single's other A-side Tatta Hitori no Mikata (meaning "Only One Ally")—although neither was included as an instrumental version. The mini-album was released December 14th, 2011 in Japan.

The official lyrics were released on the Infinity album.

For example, supposing
That you were here right now, what would I tell you?

Having no words as it is, surely,
I'll just lay my cheek on that chest and let my tears fall

If we could hug each other once more,
We will bind together strongly
So that we'll never be apart again
That is the ray of hope,
Surely

Love, please take me
To the Promised Place
Because the feelings we could connect together are eternal
If we can hold each other in our arms
By calling out for love,
I can go to meet you without fearing any future
I will gaze into your eyes and answer:
I am here beside you

Quietly, my heart said,
I am here, and I love you

Even if you go away forever,
I will deliver these enduring feelings to you

Love, please take me
To the Promised Place
Because the vow to go there is eternal
If we can hold each other in our arms
By calling out for love,
I will overcome any kind of pain with a smile
The light will never be lost again
I will go there for sure

Time heals everything
And I'll start walking out now
Than just wait for it
In the place to which the wind points,
Tomorrow awaits, surely

Love, please take me
To the Promised Place,
To the day
We can just nod and hold each other close

Love, please take me
To the Promised Place
Because the feelings we could connect together are eternal
If we can hold each other in our arms
By calling out for love,
I can go to meet you without fearing any future
I will gaze into your eyes and answer:

I am here beside you

The official lyrics were released on the Infinity album.

English
VERSE 1
Staring the stars, feeling the winds every time
I cannot stop thinking of you
Since you've been gone away from here
Shedding the tears, crying out loud for once
Cos you were so precious part of me
And there's no one to fill my broken heart

VERSE 2
Having a dream, basking in the sun everyday
I'm starting to thank that I'm still here
Though the pain of loss still hurts me
Giving me smile, making me laugh many times
Everything is very gentle to me
Because you are making it so

BRIDGE
Pray for all the things in this world
and believe in the power of our love
then sing a song of tomorrow
now we are not alone
and we come to life again
A new day will come to you, for you and me

The song describes the story of Final Fantasy XIII-2 and the relationships between Serah Farron and her sister Lightning, as well as her fiancé, Snow Villiers. It may also allude to the relationship between Noel Kreiss and Paddra Nsu-Yeul. The song is about finding the strength to carry on even after being apart from loved-ones across time and space, a common theme in Final Fantasy XIII-2.

Two people have left Serah since the ending of Final Fantasy XIII. Lightning disappeared right after Cocoon fell, and Snow left two years later. Serah thinks of them both constantly. Noel, the game's other protagonist, is always thinking of Yeul, the person whose Guardian he wanted to become, but she died while still young leaving Noel alone. After Serah dies, she leaves people behind, most notably Lightning, who crystallizes herself to preserve Serah's memory and the "new world" she fought to create.

Noel leaves a message to his past self that can be found in New Bodhum 700 AF, where he alludes to Serah's death and tells himself to stay strong because there are "dark times" to come and he will have to face them without having Serah by his side. Also to be found there is a message where Serah describes herself as being in a dark place and unable to feel anything, but feeling no regrets as to the actions that brought her there.

The song talks about "seeing the New World" with "the love you gave me". Many people in Final Fantasy XIII-2 fight with the power of love. Serah's love for Snow and Lightning gives her the strength to start her quest. The situation is similar to Noel in regards to Yeul. At the end of the game Lightning's hope for the future is restored after she learns Serah was ready to die for her sake to give Lightning a future worth living in, even if she wouldn't be able to be there herself.

The "new world" may allude to the unexplored world of Gran Pulse where the people of Cocoon were forced to migrate to after the catastrophe, and it is largely a new realm for both protagonists Serah and Noel; for Serah because she is from Cocoon, and for Noel because he hails from another time. The "new world" also alludes to the new future that Serah and Noel want; they want to change the future and eradicate the Dying World from the timeline, effectively remaking the world into a "new world".

Another allusion is at the end of the game when Lightning crystallizes herself with Serah's wish in her heart. After learning of how Serah sacrificed herself, Lightning decides to live on and see the "new world" in the future, where she will one day wake up at the end of eternity.

The song plays during the ending and talks about keeping hope alive even after having lost people dear to us. Final Fantasy XIII-2 ends on a sad note with Serah dying and chaos taking over the world, and the song's message also reminds to keep hope alive even during the darkest of times, in its own way alluding how the end of Final Fantasy XIII-2 wasn't the end of the world and that even in a world overtaken by chaos hope of a better future still persists.

The song may also allude as a foreshadowing to the events of Lightning Returns. As in the very end, Lightning and friends travel to the "New World" to live in peace after all their struggles.