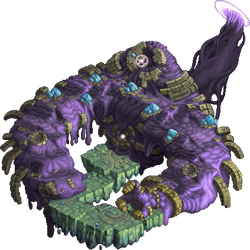 The Neukhia is the final boss of Final Fantasy Tactics A2: Grimoire of the Rift, appearing as a gigantic purple hand ripping through the rift. It consists of three parts, the Pod, the Core, and the Wisp.

The Neukhia first appears in the second half of the mission "A Request," after Clan Gully is teleported to Zellea, the Forbidden Land. Only the Neukhia Pod, a three-pronged hand, is present in this battle. Once defeated, the pod retreats back into the Rift.

Once summoned by Illua using her Grimoire, the Neukhia appears in full fury with its entire body emerging from the Rift. The Neukhia itself takes up most of the battlefield, but party members can walk over most of its viscous purple form.

An extension of the Neukhia. It destroys all who draw near.

The Neukhia Pod stays on the offensive. Its attacks are not that powerful while the Neukhia Wisp is alive, but when the Wisp is defeated it will begin to use its powerful spells more frequently, one of which is the Demon Wall's Telega, which transports a unit next to the Pod and inflicts Immobilize. Destroying the Neukhia Pod allows for easier access up the right side of the battlefield.

The heart of the Neukhia. The fires of the Apocalypse burn within its light.

The Neukhia Core plays different roles in the battle depending on the condition of the other components. It will constantly buff or heal the Neukhia Wisp with Charge Ray or Restoration Ray until the Wisp is defeated. Then it will go on the offensive, making certain stones on the map glow golden with the Rewind ability. If the party members fail to remove the energies from the stones in time, the Core will use Grand Cross, inflicting huge damage on all allies close to the stones.

An extension of the Neukhia. Its ghostly form dances before the shapeless mass.

The Neukhia Wisp is an elusive foe, teleporting between three different points on the map each time it is attacked. These tiles are marked by a stone ring and are in the far left, center, and far right areas of the battlefield.

The Neukhia pulsates with the dark powers of the underworld.

The demon wall pursues those who cross its path with a power that shakes the foundation of the earth.

The Neukhia Pod is the only component that knows an Elimination ability.

Telega.
Add a photo to this gallery

"Neukhia" seems to come from the Greek language, though it is currently unknown what word it is based on or derived from. It may be based on Nekuya (Νεκυια), which is a song serving to evoke the dead in ancient Greek theater.

Final Fantasy Tactics A2: Grimoire of the Rift
Retrieved from "https://finalfantasy.fandom.com/wiki/Neukhia?oldid=3292590"
Community content is available under CC-BY-SA unless otherwise noted.