A variety of magicite with the unusual property of absorbing Mist, thereby nullifying the effects of magick. Though there is some mention of nethicite in ancient tomes, it had been lost, or perhaps consumed, with no mention or record appearing for several centuries. Sky pirates call it the magicite of legend. Latterly, methods of manufacting nethicite have been developed in Archades, and at the time of writing, several test samples are in active use.

Deifacted nethicite is too strong to be controlled properly, and dangerous when it cannot be. Manufacted nethicite is weaker, but safer and easier to use. Nethicite can disrupt magickal energy and machines that rely on it with its presence, and can absorb magickal attacks. Charged with Mist, it can create skystones resistant to jagd, be used to summon Espers, and can even be implanted in a person's body to augment their physical strength and magickal abilities, although such use of nethicite damages one's sanity and eventually causes the host's body to break down into Mist.

Deifacted nethicite was created by the Occuria in the form of the Sun-Cryst. They sought to give nethicite first to the garif, but they could not or would not use it as the Occuria demanded, so they turned their attention to King Raithwall of Dalmasca instead. They granted Raithwall the Sword of Kings, which could cut nethicite, and Raithwall took three shards from the Sun-Cryst. He went on to conquer much of the nearby territories and founded the Galtean Alliance, of which Dalmasca, Nabradia, Rozarria, and Archadia were members. Raithwall was crowned the first Dynast King, a uniter of Ivalice.

When Raithwall died the three shards he had cut were split up. The Midlight Shard was given to what would become House Nabradia, the Dusk Shard was kept in Dalmasca—hidden in the Royal Palace of Rabanastre—and the third piece, the Dawn Shard, was buried with Raithwall in his tomb, a secret kept by the Dalmascan royal family. The peace he had brought to Ivalice endured for hundreds of years.

One of the Occuria, Venat, believed that using gifts of power to control the factions of Ivalice was wrong and sought to break their hold over Ivalice and free her people from Occurian control. Seven years ago an Archadian expedition led by Cidolfus Demen Bunansa ventured into Giruvegan, where the seat of the Occuria rested. Venat made contact with Cid and the two entered into an alliance. Cid returned to Archadia with Venat and, guided by the Occuria, synthesized artificial nethicite from ordinary magicite mined at the Lhusu Mines. Over the next several years Archadia's power grew with nethicite empowering their armies, and were even able to develop skystones that let their airships fly over jagd, something impossible with normal skystones.

Archadia declared war on Dalmasca and Nabradia. During the invasion of Nabradia, Doctor Cid bid Judge Zecht to find the Midlight Shard hidden in the city of Nabudis and use its power to witness the might of deifacted nethicite against manufacted nethicite. The Midlight Shard's power discharged in a massive explosion that turned Nabudis and surrounding environs to rubble, sinking the land and creating a thick Mist to fill the valley that resulted in many dangerous monsters moving into what was left. The area became a no-man's-land known as the Necrohol of Nabudis and Nabreus Deadlands. The Midlight Shard, its power expended, was retrieved and handed off to Cid.

The Archadians conquer Dalmasca intent on searching the city for the Dusk Shard. During an attack on the Royal Palace of Rabanastre by the Resistance forces, a street thief named Vaan discovers the Dusk Shard hidden in a statue in the palace treasury. Pursued by the sky pirates Balthier and Fran, Vaan keeps the stone as the three are caught in the battle between the Resistance and Archadia. The three remain ignorant of the stone's origins, presuming it a piece of normal magicite.

The group heads to the Lhusu Mines to save Vaan's friend Penelo from the bounty hunter Ba'Gamnan and are joined by an Archadian boy who introduces himself as "Lamont". His true identity is that of Larsa Ferrinas Solidor, who wants to inspect the mines to see for himself whether they really provide the Draklor Laboratory with magicite behind the Emperor Gramis Gana Solidor's back. In the mines he takes out a piece of manufacted nethicite that reacts to the magicite nearby, rousing Balthier's suspicions and "Lamont's" cover is blown.

When the group is held captive aboard the Dreadnought Leviathan the Dusk Shard reacts to Ashelia B'nargin Dalmasca's presence, identifying her as Raithwall's kin. Basch fon Ronsenburg and Ashe recognize it, and Vaan relinquishes the stone to Judge Ghis in exchange for their lives. The group escapes the Leviathan with Larsa's aid, who gifts Penelo his piece of manufacted nethicite. As the party faces off against Ghis, the piece of manufacted nethicite absorbs a magickal attack he sends their way, saving them. The party bests Ghis and escapes, and afterward Ghis has the Dusk Shard sent to Archadia and Doctor Cid.

Seeking proof of her royal lineage, Ashe and the group enter Raithwall's Tomb to retrieve the Dawn Shard. Though they succeed, Ghis returns and seizes the shard from them. Wishing to learn the nethicite's power for himself, he has it tested to see how much power it could generate resulting in an explosion of Mist that destroys Ghis's fleet. Ashe and the party recover the Dawn Shard, but with its power expended it is of no use.

The party runs into Larsa again who wishes for Ashe to meet with Gran Kiltias Anastasis. On their way to Mt Bur-Omisace the party visits the Henne Mines where they run into Fran's sister Mjrn who has been given a piece of manufacted nethicite and been possessed by it. The party snaps her out of her fervor, but Larsa asks Penelo to return the piece of manufacted nethicite he'd given her earlier, apologizing for not realizing the danger.

The Gran Kiltias directs Ashe to find the Sword of Kings in the Stilshrine of Miriam, and Larsa remains behind as Ashe takes the others to find the sword. Afterward, Anastasis is killed by Judge Bergan, who had set nethicite into his own body to augment his power, but the nethicite's power is too great and Bergan is destroyed by it.

The group sneaks into the Imperial capital of Archades intending to use the Sword of Kings to destroy the shards of deifacted in Cid's possession. He escapes and directs them to Giruvegan where Ashe meets with the Occuria who grant her a new sword, the Treaty-Blade, and tell her to cut new shards from the Sun-Cryst. With the aid of a mysterious sky pirate Reddas, the group travels to the Ridorana Cataract and finds the Sun-Cryst atop the Pharos. Reddas reveals his identity as Judge Zecht, and encourages Ashe not to be tempted by the nethicite's power. Ashe refuses to take the Sun-Cryst's power and instead declares to destroy it.

The party accosts Vayne Carudas Solidor on the Sky Fortress Bahamut during the Battle above Rabanastre between the Resistance and the Archadian Imperial Fleets. They are joined by Larsa, who wishes to avert the war. Vayne is willing to even attack Larsa to have his way, but when he summons an array of magickal swords to attack the party, Larsa holds up the piece of manufacted nethicite that repels the attack before shattering. Vayne merges with Venat to become the Undying, but is defeated. The war is averted and Larsa becomes the new Emperor, who presumably leads Archadia to a new path free of nethicite.

Pieces of nethicite can be obtained in-game and equipped as accessories.

A piece of Manufacted Nethicite is acquired as an accessory on the Dreadnought Leviathan. It halves all elemental damage to the wearer, but inflicts permanent Silence status.

A gem bearing massive power. If you're lucky, this one is fake.

Nethicite is a special trade accessory obtained via Battlegen against a Friend Card of Gabranth, and is used to create the Thornlet.

When Gabranth uses his EX Charge abilities to charge his EX Meter, he glows in a manner similar to those using the power of nethicite, and his aura in EX Mode is similar to the same glow.

A gem sent by the Dynast-King.

Nethicite returns as an accessory, and the said aura graphics on Gabranth are also retained.

The nethicite-made core of the Great Crystal. 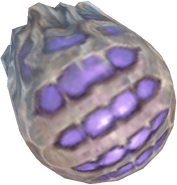 In-game model of the Dawn Shard. 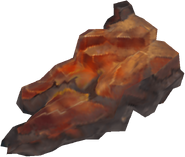 In-game model of the Dusk Shard.

In-game model of the Midlight Shard.

The suffix -ite is derived from the Greek word lithos (from its adjectival form -ites), meaning "rock" or "stone".

Mankind gaining the means of making their own nethicite in Final Fantasy XII resembles the concept of the theft of fire for the benefit of humanity, a recurring theme in many world mythologies.

Crystals are a recurring motif in the Final Fantasy series, and the people who gain their blessing or power are dubbed Warriors of Light. Nethicite represents this theme in Final Fantasy XII, though in subversion Ashe rejects taking up the role as the "Warrior of Light" (Dynast-King).