I was short a few souls, and came to collect.

Nero the Sable is an antagonist in Dirge of Cerberus -Final Fantasy VII-. He rarely leaves his brother Weiss's side in the ruins of Shinra Electric Power Company, and is not seen to have a friendly relationship with anyone else. Nero is Weiss's assistant and leads the Tsviets while his brother is incapacitated. Nero is the only Tsviet whose power Weiss does not possess. He acts only for Weiss and Deepground's cause, except for occasionally tormenting Vincent or Shelke.

Nero is a thin man with long unkempt black hair and magenta eyes with feline irises. A mechanical pair of wings spreads from his back. Nero makes regular use of his metal apparatus, but while they resemble wings, he cannot use them for flight.

Nero wears a gray Mako suit with straitjacket arms that are at first secured, but later broken at the elbow revealing tattoos extending to Nero's wrists, and gray, plain mid-calf boots with blue soles. Strips of metal cover Nero's face. He fights with stylized handguns and sparks of darkness rotate around him forming an X in front of him. Nero speaks with a dry English accent.

Nero's wields guns (from their appearance, possibly handguns based on the real life IMI Desert Eagle), two of which are carried by him and used by his mechanical hands, and later two identical ones drawn from darkness, which he uses with his real hands. Nero can use the arm or blade sections of his 'wings' as melee weapons.

Nero appears in Crisis Core -Final Fantasy VII- with Weiss, but their faces are not shown. They wear 1st Class SOLDIER uniforms, and Weiss's model is based on Angeal and Nero's model is based on Zack's. While Weiss's model recolors Angeal's hair and adds the Deepground logo, Nero's model makes no such changes, and the ordinary SOLDIER logo is kept intact due to only Weiss's front mid-area being seen in the scene.

Nero's personality matches his dark powers. He is the opposite of his older brother, Weiss: quiet, brooding, impassive, and unemotional. Because Weiss is his only family and has always treated him well, Nero harbors an obsessive love for him, almost to the point of worship. Nero explains to Vincent that Weiss was the only one to have ever loved him, and Nero would only ever love Weiss. Thus, he is prone to explosions of aggression should anyone threaten Weiss or his plans. Nero is blind to his brother's true intentions, and whether he has any personal ambitions or beliefs is unknown.

There are many conflicting aspects of Nero's personality, with the contradictions centered around Weiss: his older brother's strengths balance out many of Nero's weaknesses, but simultaneously inspires extreme dependency and lack of emotional control. This paradoxical temperament makes Nero's behavior unpredictable. Although he is mentally unstable, having been created through unethical bioengineering and human experimentation, he is among the more levelheaded of the Tsviets. Though he acknowledges his fellow Tsviets as allies, he only maintains relationships with them for as long as they prove useful in achieving his brother's goals, and is unconcerned with their eventual deaths. Ultimately, Nero only genuinely cares about Weiss.

He bears the same loathing and deep-seated mistrust of humanity as the rest of Deepground, with its roots in the brutal treatment he has received over the years. In his view, the humans who performed these experiments are more like monsters than himself. As much as he hates humans, Nero is not as prone to indiscriminate slaughter as Rosso the Crimson. Nero has no qualms about murder if his brother's plans demand it, but he has enough self-control to kill in moderation.

Nero can manipulate and manifest darkness, gained from the Mako associated with the dark being Chaos, which he can use to move people and objects or absorb them into darkness within or without him. He can create objects and possibly people from the darkness, as seen when he makes copies of his guns. The Mako gives him enhanced versions of the abilities usually associated with a SOLDIER member. Nero's abilities require him to wear a suit which constantly supplies him with Mako. It is implied Nero's absorbing people into darkness kills them.

Born in 1987, making him 23 years old, Nero is the biological younger brother of Weiss the Immaculate, and the only successful test subject of the stagnant Mako experiments. The experiment was based on the Omega Reports left by Grimoire Valentine and upon Nero's birth a vortex absorbed his mother into another dimension. The scientists of Deepground discovered Nero has power over darkness and confined him in a suit of Mako to contain his power.

Nero, Weiss, and Rosso continued their training and grow stronger over the years to the point they were feared to be too powerful to control and Nero's arms were bound to prevent him from using his hands to manifest his dark powers. Nero was chained inside Mako Reactor 0.

Nero and Weiss are released and sent to retrieve Genesis Rhapsodos after he is defeated by Zack Fair. Nero and Weiss take Genesis's body away in a helicopter under secret orders from President Shinra and inform Genesis of the Deepground situation and ask him to join them in an upcoming rebellion against the Restrictors, but Genesis refuses.

No one will take my brother away from me again! 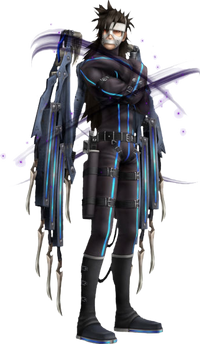 Weiss was taken over by the digitized mind of Professor Hojo. Hojo (as Weiss) taught to Nero "the secrets of rebirth" and Nero learned of Lucrecia Crescent's theorem of the Planet's ultimate and final weapon, Omega, and its herald, Chaos.

Nero ordered the Tsviets and Deepground under his brother's name to make a pure stream of Mako (in Hojo's words; Lifestream untainted by either Jenova or G-Substance) and to search for the Protomateria to bring about and control Chaos. Shelke's findings of Lucrecia's data led to information about the ex-Turk, Vincent Valentine, whom the soldiers were ordered to pursue.

Although not seen in Edge, it is likely Nero was there, as a small group of World Regenesis Organization (WRO) troops was sucked into darkness. While Vincent is searching in the abandoned Shinra Mansion, one of the Cait Siths encounters Nero in the heart of the Deepground complex beneath Midgar, Mako Reactor 0 and Nero summons darkness to engulf the cat.

During the WRO assault of Midgar Nero does not engage in the fighting with the ground assault, but discusses tactics with the Tsviet commanders. He teleports onto Cid Highwind's ship, the Shera, and wreaks havoc in the engine room by absorbing the engine room crew into darkness. Shelke enters and after a conversation, they fight. He dodges Shelke's attacks and tries to destroy her with the darkness.

Nero watches over Vincent as he descends through the Shinra Building. He sees Chaos emerge from Vincent and slaughter Azul, causing him to decide to "live out his destiny of destruction." As Nero teleports away, he accidentally drops Shelke's cellphone, which allows Vincent to regain control of Chaos.

Vincent encounters Nero within the Deepground complex where they duel. Upon being defeated, Nero taunts Vincent about Shelke's fate and tries to absorb Vincent into the darkness. As he turns to go, Vincent and Shelke appear from the darkness. He realizes Vincent is immune to the effects as he has Chaos, "a soul wrought of terra corrupt" inside him. The "terra corrupt" is tainted Lifestream, from which Chaos is fully born of and whose darkness is even greater than his own. Yuffie intervenes and, slightly confused, Nero vanishes into a portal, insisting his brother has called him.

Nero is encountered in Weiss's chamber, where, after Vincent and Yuffie find Weiss's seemingly lifeless body, he informs them of Weiss's rebirth and the start of Omega's awakening. The reactor activates and Vincent and Yuffie draw their weapons and attempt to attack Weiss, but Nero kidnaps Yuffie temporarily by sucking her into his darkness and Vincent goes to save her.

Upon exiting the darkness and finding Yuffie and Vincent still alive, Nero comments to Vincent that "there are some things that cannot be absorbed by my darkness." Nero transports Vincent into a hellish world with mysterious floating platforms and crystals above a pool of lava where Nero appears in a spider-like machine known as Arachnero, eventually transforming into Gorgonero.

After the gunfight, Nero and Vincent return to Mako Reactor 0 where a fatigued Nero limps off to Weiss. Back in Weiss's chamber, Weiss has "reborn." An excited Nero rushes over to Weiss to embrace him, but Weiss sneers and tells Nero he has no further use of him and plunges his hand into Nero's chest throwing him across the room. After it is revealed to Vincent Hojo is in control of Weiss, Weiss and Vincent battle. Unbeknownst to either Vincent or Hojo, Nero survives in spectral form and enters Weiss shortly after Hojo slew Nero.

After losing the battle to Vincent, a shocked and confused Hojo wonders why Omega's power has begun to wane. Nero, in a spectral form, appears, and begs for his brother and him to become one so they will never be parted again. When Hojo orders him to leave and stop polluting Omega, Nero ignores him. Weiss, now nearly free of Hojo's influence, hugs Nero and Nero fuses into Weiss, freeing him of Hojo's control as they vow to join "him". Weiss walks towards the center of the Mako chamber, with the compulsion he needs to bring about Omega, and vanishes in a ball of light.

Nero's fate is speculative. He either exists within Weiss, or he may have been destroyed along with Hojo when Weiss entered Omega, being a tainted being. It is possible he survived as tendrils of darkness are seen within Omega and the anguish of tortured souls can be heard, implying it may have been corrupted by Nero's darkness.

This section about a character in Dirge of Cerberus Lost Episode -Final Fantasy VII- is empty or needs to be expanded. You can help the Final Fantasy Wiki by expanding it.

Nero is fought at the end of Chapter 10. Two other forms, Arachnero and Gorgonero, are fought in Chapter 11, with no pause between forms. 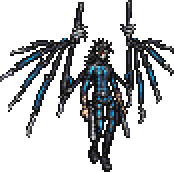 Nero is voiced by Ryōtarō Okiayu in the Japanese version. He shares his Japanese voice actor with Quon Yobatz from Final Fantasy Type-0 and Setzer Gabbiani and Terra from the Kingdom Hearts series.

He is voiced by Mike Rock in the English version.

[view · edit · purge]Nero is derived from the Sabine word meaning "vigorous" or "strong" that was later integrated into Latin meaning "black". The most famous use of this name was the Roman Emperor Nero in the first century AD. Similar to his indirect namesake, Nero was responsible for his mother's death, although in Nero's case, it was accidental. [view · edit · purge]"Sable" is an adjective commonly used to describe the black fur of animals. It is also used in heraldry to denote "black." Therefore, his name is essentially "Black the Black".