Tribunus laticlavius of the XIVth Imperial Legion, known in his native Garlemald for his groundbreaking contributions to the field of magitek. In recognition of his capabilities, he was made Gaius van Baelsar's second-in-command. Even so, he continues to oversee the development of magitek weaponry, which ever remains his foremost passion. In battle, Nero wields Mjolnir, a mighty gunhammer of his own design.

Nero tol Scaeva is a character from Final Fantasy XIV, and a major antagonist in A Realm Reborn. He holds the rank of tribunus laticlavius of the XIVth Imperial Legion of the Garlean Empire, and serves as the second-in-command to legatus Gaius van Baelsar.

Garlond... Soon you will be made to know the true power of magitek.

Nero joined Gaius Van Baelsar's new campaign to continue the subjugation of Eorzea in the aftermath of the Seventh Umbral Era. He led the legion's main intelligence branch, the Frumentarium, and minutes after his arrival at Castrum Occidens, he rooted out a spy among the ranks and slayed him in cold blood.

Nero spied on the Warrior of Light whom he witnessed slaying Ifrit. When confronted by Livia sas Junius for straying from his assigned objective, she warned to kill him herself if he failed. Nero again spied on the Warrior after their triumph over Titan, discussing the XIVth's dealings with Lahabrea. Rhitahtyn sas Arvina joined him after Lahabrea left, and he denounced Nero for being so willing to trust the Ascian. He warned Nero that his loyalty should be to Garlemald first.

Gaius met with his subordinates after the Ultima Weapon absorbed the active primals; Gaius tasked Nero with finishing the final touches on it.

Later, he was encountered in the Praetorium. Seething in rage, Nero declared to earn the respect he deserved by defeating the Warrior of Light's party, and proclaimed to finally prove himself as Cid Garlond's better. The Warrior and their friends defeated him and Nero fled, the only known Tribunus to survive a confrontation with the Warrior of Light.

Such a terrible mess. Yet it does leave the door wide open, so to speak. One cannot help but be impressed. I'm beginning to understand the reliance you place on adventurers, old friend. So...this is the legacy the Allagan Empire left behind. If my readings are correct, the energy source waiting atop the tower is a match for even the Ultima Weapon. Nay...more than a match. Heh heh heh... A new toy for me to play with. I believed the fates had conspired to deny me my just rewards once again...but it would seem they had a greater destiny in mind for me. And so long as my ambition burns, I shall strive to seize it. The dream lives on, Cid... Do not disappoint me!

Nero, outside the Crystal Tower

Now living in exile from his homeland, Nero bid his time before learning of the Crystal Tower. After the Warrior of Light and NOAH completed the Labyrinth of the Ancients, Nero investigated the tower premises and discovered a power source atop that was possibly stronger than the heart of the Ultima Weapon. Once the entrance to Syrcus Tower was open, intending to have Cid's group and the Warrior of Light do the heavy lifting, Nero joined NOAH in their expedition while revealing the true identities of Doga and Unei. Nero's plan fell apart when the Cloud of Darkness spirited him into the World of Darkness when he attempted to save Unei to use her to control the entity.

Ending up in the Realm of Darkness, Nero absorbed the void-ridden atmosphere while fending off the voidsent that the Cloud of Darkness sent to kill Doga and Unei in its stead. After being found by the Warrior of Light and G'raha Tia, Nero accompanied them on their run back to Eorzea. Though weakened as the portal closed, Nero was purified by Doga and Unei as he returned with Cid's help.

The Crystal Tower slumbers again, then. 'Tis too quiet for my taste. Good-bye, Cid. I must put all this at my back. Possibility beckons, and I am bound to follow. A new dawn has come for me.

Although he disappeared from the group shortly after their escape from the tower, Cid believed Nero would not be causing any further trouble for the time being. Nero discarded his remaining piece of Garlean technology and declared a new day had dawned for him.

Nero searched the Carteneau Flats for the still-dormant Omega, remarking that they "are going to have so much fun."

Nero assisted the Warrior of Light in defeating the primal Shinryu[1] by resurrecting Omega from beneath the Carteneau Flats. His intentions were never made clear and both Omega and Shinryu's ultimate fate was unknown as the pair were flung east into Ala Mhigan lands.

During the course of Cid's investigation of the whereabouts of Omega, Jessie hired Nero to be part of the team, much to Cid's consternation. Nero journeyed into a portal that led to the Interdimensional Rift alongside Cid, Biggs, Wedge, and the Warrior of Light where Omega subjected them to tests. After passing the initial trials, Nero set up a base inside the rift with Cid. He provided support to the Warrior of Light as they faced Omega's challenges, including giving them a gravitational device needed to face the monster known as Catastrophe. When Biggs and Wedge were nearly killed, Nero helped Cid take them to the Conjurer's Guild to be healed. He chastised Cid, who was guilt-ridden for his role in reviving Omega, for losing sight of his role as a scientist.

When Omega was ready to continue its trials, Nero reentered the Rift with the rest of the team. He revealed an upgraded version of his old armor and gunhammer, which he used to fight alongside Cid and the Warrior of Light against a number of Omega's creations. Once the group reached the Sigmascape, the location of their next series of tests, he set up base with Cid to give support to the Warrior of Light. When Nero was temporarily left alone inside the Rift, Omega wounded him, Nero hid his injuries until after they defeated Kefka, whereupon he collapsed and was taken to be treated.

Though he was still too injured to join the team in the Rift, he left his bed to talk to Cid while the latter was preparing for the final battle against Omega. This discussion allowed Cid to overcome his reluctance of using technology developed by his father during the fight. Later, after Omega had been defeated, Cid went to the infirmary to check on Nero, only to find he already left after taking a large amount of gil from Cid's account as payment for his work.

In the alternate timeline following the Eighth Umbral Calamity, Nero was one of the few Ironworks members who stayed with Cid, and continued to work with him for decades to avert it.

Nero was later tracked down and recruited to assist Garlond Ironworks in developing a cure for tempering, despite claiming to not have any interest in the matter. Having heard of his alternate self's exploits in averting the Eighth Umbral Calamity and of Allag's own inability to make such a cure, he decided to lend his expertise.

When the allies of the Scions converged in Sharlayan to complete work on the Ragnarok, Nero arrived with Cid and the rest of the Ironworks team. While helping Sharlayan and the Loporrits put the finishing touches on the starship, Nero was awestruck by the Loporrits' engineering technology. He was at the ship's launch to send the Scions off.

Nero later traveled to Garlemald to investigate the Tower of Babil and its moon teleporter for his own purposes. He found the tower in the control of Nerva yae Galvus, now in the form of a Blasphemy, and was forced to retreat. He soon encountered the Warrior of Light and Fourchenault Leveilleur, who were also investigating the tower. He agreed to help them, and fought alongside them to defeat Nerva. He convinced a group of Garlean refugees to accept Fourchenault's proposal to settle on the moon as part of a new plan between Sharlayan and the Loporrits to use the satellite as a repository of knowledge. When the refugees departed for the moon with Livingway, Nero insisted on going with them.

Nero is a blond man in maroon suit of armor with a dragon-like helmet. He uses a gunhammer called Mjolnir as his primary weapon, but also wields a gunblade. Unlike the other Tribunes, Nero prefers to not wear his helmet unless he's attending formal events or is in the thick of combat. He wears an "outlandish" traveling gear and a trench coat and a mask while investigating the Crystal Tower. During his time as a consultant of the Ironworks, he wore the standard Garlond Ironworks uniform, though colored with his usual red palette as well as a pair of shades.

While he can put on a polite, cultured air for superiors and soldiers alike, Nero is a coldblooded leader who shows little mercy to his subordinates for even the smallest infractions. A schemer and a social climber, Nero resents Cid for outdoing him in magitek engineering and for being Gaius's former favored subordinate, whose shadow Nero feels he can never escape. When Cid betrayed the empire Nero felt he would finally have his chance to outshine him. To his dismay he finds that Cid's betrayal only elevated his legendary status in the minds of the Garlean people.

Upon defecting from the empire, Nero remains smug, eccentric and arrogant as ever, especially with Cid, but becomes slightly more friendly, albeit patronizingly so, and aids in the Warrior of Light's efforts. He claims to follow the same creed as Cid's company, "freedom through technology," though he often invokes the creed to justify operating without moral restraint or regret. While he is technically a "consultant" to Garlond Ironworks, Nero doesn't take them for granted, as he aids Cid in saving Biggs and Wedge.

Nero is fought as the second boss of

The Praetorium. A simulacrum of him is again fought during

Faded Memories, alongside simulacrums of Gaius, Livia, and Rhitahtyn.

Nero fights alongside the player character in

Return to the Rift and

Forlorn Glory. He fights using a gunblade or wielding his hammer and armor in his "Iron Nero" form.

The theme "Steel Reason" plays in all the battles against Nero and the other Tribunes. It was composed by Nobuo Uematsu.

Nero appears with a lightning-elemental card bearing his official render.

Nero appears on a card in the version available via Final Fantasy Portal App. 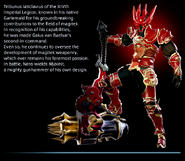 Nero prepared to fight at the Praetorium.

Nero in his private outfit.

Nero in the World of Darkness.

Nero as a member of Garlond Ironworks.

Nero with his upgraded Mjolnir.

Nero in Rise of a New Sun artwork.

[view · edit · purge]Nero is derived from the Sabine word meaning "vigorous" or "strong" that was later integrated into Latin meaning "black". The most famous use of this name was the Roman Emperor Nero in the first century AD.

His last name is likely drawn from Marcus Cassius Scaeva, a centurion in Julius Caesar's army at the Battle of Dyrrhachium, and later one of Caesar's partisans. Marcus was also known for dressing in red armor.