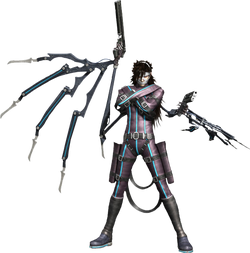 Nero is a boss in Chapter 10 of Dirge of Cerberus -Final Fantasy VII-.

His close-range attacks are strong, so they should be avoided, but his long-range attack is weak. After some damage, Nero will create two doppelgangers. Each of the three can be and must be attacked. When Nero turns purple, he cannot be damaged.

Late in the battle, he glows purple, rises into the air, and releases two spheres of darkness which home in on the player. They are difficult, but not impossible, to dodge.

As always, the player should shoot while circling him. A smart move, if the player has low HP, is to use a Limit Break before the spheres are launched. The HP is replenished, and Defense is boosted. Also, with the right timing of the LB, the spheres go through without any harm to the player.

Retrieved from "https://finalfantasy.fandom.com/wiki/Nero_(boss)?oldid=3210918"
Community content is available under CC-BY-SA unless otherwise noted.