The Nepto Temple is the home of the Nepto Dragon in Final Fantasy III. It lies to the northwest of Vikings' Cove in the Floating Continent. The party must be in Mini status to enter the mouth of the statue in the first room and finish plot events. Once the party has beaten the Giant Rat and reclaimed the Eye, they cannot traverse the rooms that require Mini again.

While searching for the cause of the Nepto Dragon's violent behavior, the Warriors of the Light find the Nepto Temple. There they notice that one of the gems that make the eyes of Nepto's statue is missing, and investigate it further. By shrinking themselves, they enter the hole that's left and come across the gem's thief, a giant rat. After defeating it, they return to the shrine's hall and restore the statue, calming the dragon.

"The Nepto Shrine" is the background music that plays inside the Nepto Temple.

The once peaceful town of Vikings' Cove has faced numerous attacks by the Nepto Dragon, which has grown violent of late. A pall lies over the village, and the Warriors of Light venture to the Nepto Temple to seek out answers. 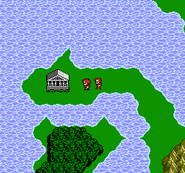