Neo Shinryu is one of the superbosses exclusive to the Advance and iOS versions of Final Fantasy V. He is found on the Sealed Temple's Shinryu's Lair on the chest containing the Ultima Weapon.

Once Neo Shinryu is killed he will doublecast Giga Flare and Meteor on the party, which may still kill them. However, it is not much of a threat, as it possesses weak Magic offense.

Despite what the Bestiary says, Neo Shinryu is vulnerable to Old, though it may take a few tries before it hits.

Neo Shinryu has two hidden targets, responsible for his so-called "high miss rate". These absorb multitarget attacks as well as Rapid Fire, and cannot be killed.

The effects from Neo Shinryu's Mighty Guard can be dispelled, but it's best not to do this. The Force Shield dropped by Omega Mk.II works to nullify Amalgest's Holy element, as does an occasional Aegis Shield block (33% chance).

The party should use single target attacks, preferably magical in nature. Level 3 Flare always hits if the player has adjusted Neo Shinryu's level to a number divisible by three, and deals high damage for a low MP cost. Single target magic attacks without a hit rate (Firaga/Blizzaga/Thundaga/Flare etc.) will hit regardless, as long as they are not multitargeted.

A cheap method to beating Neo Shinryu is to have a party of master Dragoons dual wielding Dragon Lances, and have everyone Jump constantly. The dragon should go down in four jumps if they all hit. An alternative is to use the Apollo's Harp, which will do 9,999 to Neo Shinryu if it hits.

If his level is adjusted to a level that is divisible by 2, Level 2 Old will hit in the first try.

For Neo Shinryu's final attack it is suggested to have a person with Hide to survive the last kamikaze attack. 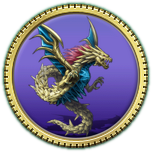 Retrieved from "https://finalfantasy.fandom.com/wiki/Neo_Shinryu?oldid=3238676"
Community content is available under CC-BY-SA unless otherwise noted.