すべてを超えし者 (Subete o Koeshimono?, lit. He Who Hath Conquered All)

Nemesis is a superboss in Final Fantasy X created by the old man who runs the Monster Arena in the Calm Lands. Nemesis is an Original Creation monster and a color variation of Ultima Weapon. Sometimes nicknamed "Omega Gold", it is the most durable and most challenging enemy in the original versions of Final Fantasy X (Penance and arguably some of the Dark Aeons in the PAL, International and HD versions are harder), with 10,000,000 Hit Points and an array of spells and attacks that can instantly kill even the highest-level, best-equipped parties.

To unlock this battle, the player has to capture ten of every fiend (that can be captured) and defeat all the other creations in the Monster Arena. Defeating Nemesis in the HD Remaster version earns the trophy/achievement Overcoming The Nemesis.

Nemesis is one of three bosses considered impossible to defeat in No Sphere Grid challenge runs due to being inaccessible, as defeating Shinryu is a requirement for fighting it. The third non-defeatable enemy in such runs is Penance.

Special damage, including Overdrives and items, will cause Nemesis to counter with Ultima. Its Ethereal Cannon is a non-elemental magic-based attack against one character, and Ultra Spark will inflict Poison, Curse, Slow and Power Break on the party. The Power Break inflicted by Ultra Spark also affects aeons. Nemesis's ultimate attack is Armageddon, which hits all characters for a fixed 99,999 damage and is graphically identical to Omega Weapon's Nova.

If a player missed Kimahri's Nova Ronso Rage from Omega Weapon, it can be acquired from Nemesis. Nemesis also has valuable items that can be stolen (Lv. 4 Key Sphere, Warp Sphere), but accomplishing this is not exactly straightforward, as it results in Ultima being used on the party. Mug does not trigger a counterattack.

Shell reduces the damage of Ethereal Cannon and Ultima, and Protect mitigates Nemesis's physical attack. Neither will affect Ultra Spark, which can only be reduced via an increased Defense stat (including via Cheer) or an aeon using Shield.

For an easy win, the player should use three party members with fully powered Celestial Weapons, not including Yuna. The party should use nothing but Quick Hit to deal massive damage before Nemesis gets a chance to act. When his turn is about to come up the player should switch in Yuna and summon.

The aeon will get in one or two attacks before being killed, at which point the original party can return and resume Quick Hit. Nemesis will run out of HP long before Yuna runs out of aeons. This strategy guarantees a win without the party taking a single HP of damage.

This strategy is still viable but no longer as effective in the International and HD Remaster versions, because Quick Hit no longer removes as much delay as the original NA/JP version. Auto-Life becomes practically mandatory to survive Ultra Spark and Armageddon. Rikku's Hyper Mighty G mix casts Auto-Life on the entire party. The player can assign each party member an Overdrive Mode of Comrade to easily fill up Rikku's Overdrive after each trigger of Auto-Life. Having a supply of Megalixirs on hand is useful to quickly heal. If the player enters with the Magus Sisters' and Anima's Overdrive bars maxed, or Yuna's for Grand Summon, these can also be used to deal heavy damage before Nemesis takes out the aeon.

Following defeat, Nemesis will drop weapons with Break Damage Limit or armor with Break HP Limit abilities, and two or three empty expansion slots. Its equipment drops provide a hidden 6% critical hit chance bonus instead of the usual 3% (this is relevant to weapons and armor pieces, but only to attacks that deal physical damage).

Once Nemesis is defeated the player will receive the trophy item, Mark of Conquest. Despite the bragging rights that come along with such an item, Nemesis can be fought an unlimited amount of times provided the player has enough gil. 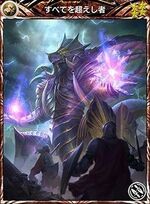 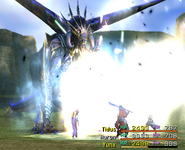 [view · edit · purge]Nemesis means something a person cannot conquer, or an opponent whom a person cannot best. It can also mean an agent or act of retribution or punishment. It originates from Greek némesis meaning "a dealing out", verbid of némein "to dispense (justice)". Nemesis is also a goddess from Greek mythology.

The Japanese name for Nemesis, (すべてを超えし者, Subete Wo Koeshimono?) means "he who hath transcended/conquered all". His name is Il Supremo in Italian, meaning "the supreme", Summum in Spanish, which means "the top, the max" in Latin, Être Suprême, lit: Supreme One, in French, and Deus in German, which is Latin for "god".

After defeating Nemesis for the first time, the owner of the Monster Arena tells the the party that they will be known as "one who has conquered all", referencing the Japanese name.