Ruins of an ancient temple built between two sheer cliffs. Used as a base for freedom fighters during the Fifty Years' War.

Nelveska Temple (ネルベスカ神殿, Nerubesuka-shinden?) is a location from Final Fantasy Tactics. Located north of Zeltennia Castle, it is an abandoned temple off the beaten path. When Ramza Beoulve arrives here, he finds it guarded by Construct 7. He defeats the robot to claim the auracite Cancer. If Reis and Beowulf are still in Ramza's party during this battle, Reis will regain her human form.

Acquiring the items on the pillars requires the character with Treasure Hunter to have Jump 4, as well as a large monster (dragon, Construct 8, etc.) next to the pillar as a step up, to reach them. The Nagrarock is inside the temple. 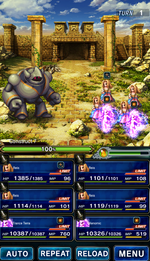