Mysterious fork that causes the opposite effect of "Soft".

The Needle Fork is the second available weapon for Quina, providing 34 Attack, capable of inflicting Petrify (10%) when attacking with Add Status equipped, and teaches the ability High Tide. It can be bought for 3,100 gil at Burmecia's Mogshop, Treno when it is visited as Garnet and Steiner, Cleyra, and Ipsen's Castle's Mogshop, stolen from Zaghnol during the Festival of the Hunt, and found as treasure at Cleyra's Trunk.

A red fork from the distant world of Gaia of gigantic size obviously created for battle. In its world of origin it can be purchased in the capital of Burmecia, home to the rat-like people known as Burmecians. 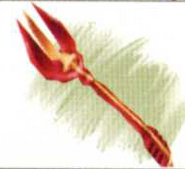 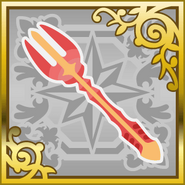 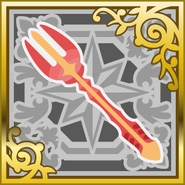