Necrophobe, also known as Necrophobia, or Necrofobe, is a boss and a Demon of the Rift in Final Fantasy V. He is hiding in the final area in the Interdimensional Rift, and when the party defeats him, they are rewarded with the final save point.

The reason Necrophobe's HP is comprised of fours is based on a pun of the Japanese word for death, 死 (pronounced "shi"). The same pronunciation is used for the number 4.

Necrophobe is invincible when the battle begins, as he is surrounded by four barriers. As long as he has a barrier, he cannot be targeted by spells or attacks. His barriers will constantly attack the player party with strong magic and attacks, but Necrophobe himself does little.

Once the barriers are gone, Necrophobe is weak to everything.

Gilgamesh won't reappear against Necrophobe in rematch at the Cloister of the Dead even if he survived from the first battle. 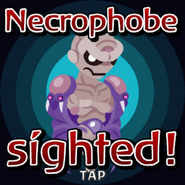 Necrophobe sighted inside a Gate Crystal. 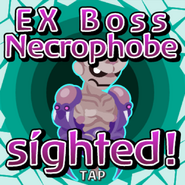 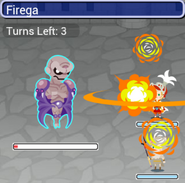 Firega.
Add a photo to this gallery

Necrophobe from Final Fantasy Airborne Brigade appears as a trading card. It is ice-elemental.

Flare.
Add a photo to this gallery

[view · edit · purge]"Necrophobia" is the morbid, abnormal or persistent fear of dead things as well as things associated with death.

Despite the enemy name of "Necrophobe" in the Anthology release, battle messages will credit his speech to "Necrophobia". Necrophobia literally means "fear of the dead".

Retrieved from "https://finalfantasy.fandom.com/wiki/Necrophobe_(Final_Fantasy_V)?oldid=3276428"
Community content is available under CC-BY-SA unless otherwise noted.