You stand before the final dimension, and I am the darkness of eternity...

Necron is the final boss of Final Fantasy IX, appearing in the area Hill of Despair. It represents death and existential dread itself. Necron's ultimate goal is to reduce everything to nothingness.

Necron is an otherworldly being with a humanoid torso. It has a glowing pale blue skin that may be intended to look crystalline. Its face looks like it is covered by a mask that has holes and a mouth. Necron's torso appears like without skin, its muscles being pronounced. Its arm-like limbs taper off into two tentacles with stingers at the ends and it has large wing-like protrusions; although Necron hovers, the wings appear ornamental.

Necron wants to fulfill what it perceives to be mankind's yearning for death. Necron is neutral and does not hate living beings, but considers the Zero World a release all living beings seek, and itself benevolent for offering it. As Necron represents death itself, it states it will always exist as long as there is life in the universe.

When Zidane awakens on the Hill of Despair, he is greeted by Necron's voice emanating from rays of light above the hill. The entity announces that by observing Kuja's murderous actions it has concluded all life exists to seek death. Necron resolves to destroy the crystal, the origin of life, and thus revert everything to a "zero world" of perpetual nothingness, an existence that would be without the fear of death. It teleports the heroes to a coliseum-like structure and engages them in battle.

Though Necron utilizes a plethora of destructive magic, it is defeated. Kuja uses the last of his powers to teleport Zidane and his friends back to the Iifa Tree, and as Necron dissipates, it is shocked to find the strength of those who have the will to live. The being pledges that it will always exist, as long as there is life and death.

In Final Fantasy 20th Anniversary Ultimania — File 1: Character Book, Necron is described as, "a being awakened by Kuja's fear, despair, and hatred, which called out to it as he learned of his mortality, just as his ambitions were within reach".

Necron is fought at the Hill of Despair as the final boss. Players get to choose four of the player characters to fight it, as well as check for their equipment and ability settings. The player doesn't need to bring Zidane.

The theme that plays during the fight with Necron is called "The Final Battle", alternatively titled "Grand Cross" by the Black Mages on their third album, after the ability of the same name.

The piece was composed by Nobuo Uematsu.

Kuja, in all his narcissism and envy, can do nothing but despair when he learns of his own mortality. His terror in the face of death summons this being of eternal darkness which seeks to return all to nothingness.

Necron appears as an enemy in Battle Music Sequences. 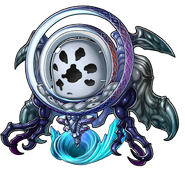 Necron appears on an Ice-elemental card.

Hades was originally planned to be the final boss, but was changed to an optional boss. The concept artwork at right of the final battlefield shows the party fighting Hades instead of Necron. Hades was relegated to an optional boss in the final game, but appears with an eye within his sword and numerous prominent eyes peering from his throne. There are also blinking eyes on the interior walls of the colosseum-like arena where Necron is fought. It is possible that Hades represented the final culmination of the many eye motifs observed throughout the game, seen largely displayed on structures of Terran design.

The character who speaks to Necron prior to the final battle depends on who is in the party as well as who has priority over whom. As the protagonist, Zidane has top priority. Eiko has the next highest priority, followed by Steiner, Vivi, and Freya. Amarant, Quina, and Garnet, due to having the lowest priority rankings, never speak to Necron.

[view · edit · purge]"Necron" is related to the Greek word νεκρός (nekrós) which simply means "dead". νεκρόν (Necron with the intonation at the "o") is the neuter form of the adjective, possibly meaning that Necron is neither male nor female. It could also be a substantive form of the adjective, thus meaning "the death".

In the English version Necron makes a speech identical to one made by Yoda from the Star Wars franchise (specifically, Episode I: The Phantom Menace); "Fear leads to anger... anger leads to hate... hate leads to suffering..."

Necron shares a few similarities with Exdeath (Neo Exdeath in particular) with both wanting to revert everything to nothingness. Their battle themes have similar musical motifs, and both are the same shade of blue and they share an attack name, Grand Cross. Necron also shares many similarities with the Cloud of Darkness, both of whom are the final bosses of their game revealed only at the climax, both are summoned by someone fearing his mortality, and both are created to revert the world back to nothing. Before fighting Necron Zidane's party members are also revived by the non-fighting playable characters similar to how the Warriors of Light were revived by Doga and Unei. Design wise his posture is reminiscent of Necrophobe.