Somebody hit this guy with a ZombiStick, and you're next. Also casts X-Zone.

Necromancer is an enemy fought at the final floors of the Interdimensional Rift. It is often paired up with other enemies, mostly with the Gorgimera, and is highly dangerous due to its usage of Zombie Powder. It is somewhat valuable due to it being the only source for additional Bone Mails.

Necromancer is an enemy fought at Phoenix Cave. It is a dangerous foe due to its use of Banish for Instant Death to the party, as well as Death, Flare, and Graviga. It can inflict Zombie with its Zombie Stick attack. Banish, Death, and Flare are only used when it is alone, therefore it should be defeated before all other enemies. 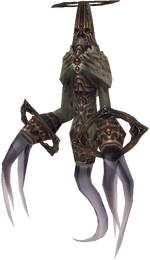 Necrofiend is an enemy fought at Henne Mines and Pharos, both in the Second/Third Ascents as well as the Subterra. They are dangerous foes due to their Curse ability which inflicts many statuses to the party, the Darkga spell, and the Maser Eye ability. They can mostly be dealt with by equipping either the Demon Shield or Black Mask to absorb their Darkga and Maser Eye attacks. They are one of two enemies that are the source of Lifewicks, needed for the Durandal.

Necromancer is a Mindflayer-type daemon fought in the dark.

The Magician is an enemy and also a possible monster that the party can transform into.

This gallery is incomplete and requires FFXII version for PFF added. You can help the Final Fantasy Wiki by uploading images.

[view · edit · purge]Necromancy is a form of magic involving communication with the deceased—either by summoning their spirit as an apparition or raising them bodily—for the purpose of divination, imparting the means to foretell future events or discover hidden knowledge. The term may sometimes be used in a more general sense to refer to black magic or witchcraft.