Dark wizards who are masters of the undead, and have no fear of the Dark Arts.

The Necromancer is a job in the Game Boy Advance and the now defunct mobile and Steam versions of Final Fantasy V, found in the Sealed Temple after defeating Enuo. It is a unique job with a potetially powerful set of abilities. Though a powerful and interesting job, by the time it is acquired, there are few challenges in the game remaining.

Dark Arts is more powerful than the Black Magic and Summon skillsets, and can be further boosted due to the equipment choices the Necromancer has (rods for fire, ice, lightning, and poison, and Air Knife for wind). The Necromancer is similar to the Blue Mage in that any Dark Arts must be learned from enemies; the Necromancer must deal the finishing blow to a specific enemy to learn a Dark Arts spell.

Mastering Necromancer for all four characters in the defunct mobile and Steam versions earns the achievement "Undead Freak".

Bartz, Faris, and Krile dress in pinkish violet robes, whereas Lenna wears a black battlekini with a cape. All costumes incorporate a skull design: Bartz wears a skull mask, while Lenna and Krile's headdresses have it. Faris's headdress resembles The Emperor's hair from Final Fantasy II. In the defunct mobile and Steam version, Bartz no longer wears a skull mask and has a skull placed the same way as Lenna and Krile have theirs.

Any job equipped with Dark Arts Level 1 will gain their character's base Freelancer Magic +13 if their default stat is lower. For each additional Dark Arts level up to level 5, the Magic bonus is increased by 4 per level, for a maximum of +29 Magic at Dark Arts Level 5.

Thus, the base Magic stat for a character with Dark Arts equipped is as follows:

Upon mastery, Freelancers and Mimes gain the Necromancer's stats unless they already have a higher base from another mastered job.

Rods will randomly deal anywhere between 0% to 200% of its listed damage based on the attacker's Magic stat and the defender's Magic Defense stat and deal full damage from the back row. Many rods can be consumed to cast item magic. Wonder Wand will cast spells in a specified order, starting from Cure up to Osmose, and then loops back to Cure. It can be used when the Mute spell has been cast. The ultimate rod is Demon's Rod found in the bonus dungeon Sealed Temple.

The Undead innate support ability means that a Necromancer will be hurt by healing spells and items in battle, but spells like Death will fully replenish their HP. Outside of battle they can be healed normally. Like the Berserker's Berserk ability, the Freelancer and Mime jobs are unaffected by Undead once Necromancer has been mastered. Undead reverses all draining spells except Drain Touch, and most healing spells and items will deal damage instead. Any item or spell that would revive sets the Undead user's HP to single digits. KO'd characters with the Undead ability may be revived normally, as opposed to the Bone Mail's innate Undead ability. 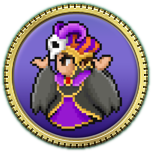 [view · edit · purge]Necromancy is a form of magic involving communication with the deceased—either by summoning their spirit as an apparition or raising them bodily—for the purpose of divination, imparting the means to foretell future events or discover hidden knowledge. The term may sometimes be used in a more general sense to refer to black magic or witchcraft.