Cid Pollendina: Oh, shut up and help me remodel the Necrohol of Nabudis page!
Please expand this article into a full one. The following tasks need to be completed:

The nethicite's Mist has corrupted the life of this place. It is a Necrohol overrun with Beasts. We tread here on a Fool's errand, and we had best turn back.

The Necrohol of Nabudis is a location in the land of Ivalice in Final Fantasy XII. Once it was the capital of the Kingdom of Nabradia, sitting gracefully in the middle of a gigantic lake. Now what remains of the city is corrupted by the thick Mist that covers the north part of the region. The area of the Necrohol that the player can explore is the Verdpale Palace, and it served as the official residence of the King of Nabradia, his son Rasler, and their immediate family members.

The Necrohol of Nabudis is within Nabradian borders, but unlike the rest of the region, is not under direct Imperial rule. The location is not part of the main storyline and during the entrance cutscene, the player is told it is a foreboding place and is warned against exploring the area. Depending on when the Necrohol is reached, this warning is given by Basch, Balthier or Fran.

The player can access the area as soon as the Dawn Shard has been acquired. This means that in the original version, the ultimate spear, the Zodiac Spear, can be acquired fairly early. Even if Zodiac Spear is no longer there in the Zodiac versions, the place still has many useful treasures, such as high level White Magicks. To traverse the area with a low level party, the player can exploit the Immobilize glitch.

Palace once home to the royal family Nabradia. Called the Verdpale Palace, it once stood proudly in the middle of a lake. Now it stands in ruin, destroyed in the attack on Nabudis two years ago. Though the ghost of the building remains in the crumbling walls, it is wholly gutted and lies half-submerged in the murk. Now Mist flows freely through its abandoned halls, and its glorious memory is profaned by a menagerie of vile creatures.

Necrohol of Nabudis can be accessed from Salikawood or Nabreus Deadlands. There are no Save Crystals inside. To reach the Necrohol, the player must defeat the King Bomb in Salikawood.

In the original versions, Zodiac Spear—the most powerful spear—can be obtained from a treasure chest (in blue) inside the Necrohol,if the player has not claimed any of the four forbidden chests found earlier in the game. The Zodiac Spear is in the Cloister of the Highborn area, in a group of 16 chests in the second chest from the left in the front row. The player should make sure none of the characters are equipped with Diamond Armlet accessory, or the treasure will be Dark Matter.

The 16 chests in the room correspond with the 16 chests found on the Phon Coast shore, and once claimed, will disappear from both locations and will never respawn. If the player is to open the chests with the Diamond Armlet on, they will contain Dark Matter instead of Knots of Rust. It is recommended to first get the spear, and then open the other chests with the Diamond Armlet on to get the Dark Matters either at Necrohol or at Phon Coast.

Apart from the 16 chests in the Cloister of the Highborn, the original version only has two other treasures, both in the Cloister of Distant Song area. They are also Dark Matter if opened with the Diamond Armlet, making it a good place to farm them as the treasures spawn 50% of the time. The northernmost treasure in the area can be the weapon Defender.

The concept of forbidden chests was removed from the Zodiac versions. Instead, the dungeon has an entirely new layout of treasures, including the useful Faith spell in the Hall of the Ivory Covenant, and its physical counterpart, Bravery, in the Cloister of the Highborn. The Protectga spell is found in the Cloister of Distant Song.

Hall of the Ivory Covenant[]

Cloister of the Highborn[]

In the original version, chests in this location do not respawn, most do not hold gil.

The only thing that remains is the royal palace, and it is now a ruin swarming with the souls of the people killed in the destruction, full of regret and resentment. Two years ago, Judge Zecht came to Nabudis with the Midlight Shard under Dr. Cid's instructions to observe how deifacted nethicite worked and reacted. It wiped out the city and covered the area in a thick Mist. It soon became a haven for various creatures most vile.

Deep inside the Necrohol are three fearsome beasts that possess the power to destroy the world. In fear of the their power, three nu mou sealed the monsters away while dying in the process. Within the two years of the destruction of Nabudis, the seals are weakening, and so the spirits of the nu mou set out to locate a hero of great strength who could defeat the monsters once and for all. 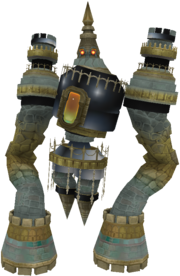 The Goliath is a Rank VI Mark whose hunt can be undertaken after the events in the Draklor Laboratory. The Goliath is found in the Hall of Slumbering Might area after being petitioned by Barrong in Nalbina Fortress. Goliath is part of the Jovy sidequest.

The Deathscythe is a Rank VI Mark whose hunt can also be undertaken after the events in Draklor Laboratory. Deathscythe can be found in the Cloister of the Highborn area, but to spawn it, the player must go to the Cloister of the Highborn and reduce one character's health to less than 10%. If it does not spawn the Deathscythe, the player must reduce a second character's HP to less than 10%. It is not required to reduce the character(s) HP below 10% before entering the area. Completing this hunt is one of the easier methods of obtaining a Soul of Thamasa, an item needed to make High Arcana at the Bazaar. Deathscythe is also part of the Jovy sidequest in Nalbina. 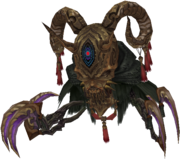 To find Vorres the player must have spoken to the "Huntmaster" in Phon Coast and defeated Thalassinon, which will start of the Rare Game quest. Vorres then appears in the Hall of the Ivory Covenant area. To get it to appear, the player must find a Dark Elemental, provoke it, and lure it to the door that leads to the Cloister of Reason (where the optional boss Fury is located), in the middle of the map. The Dark Elemental is found just north of the door, and when it is in the correct location, Vorres appears in the room south of the door.

Like all Trophy Game, once Vorres is killed, it will not reappear, so the player should be sure to steal the Soul Powder it has, an item required for making the Tournesol. Multiple Soul Powders can be obtained by stealing the loot without killing Vorres, then retreating two screens away and returning to lure the Dark Elemental, spawning Vorres once more.

The Baknamy Merchant is not initially visible. It is found in the, Cloister of the Highborn (Zodiac) or Hall of Effulgent Light (original). In the original game, the merchant is in a secret room connected to the northern-most area (this secret room also contains a Mimic Chest). It is hidden in a corner, with the description ???. In the Zodiac versions, the Merchant is found at the Cloister of the Highborn on the northern-most area by speaking to the ??? by the corner before the tiny room.

In the original versions, the merchant will initially only sell Ethers. After the party completes the Great Crystal, most of its inventory becomes available except for the magick Scathe, which is unlocked when the Sky Fortress Bahamut rises. The merchant's wares are completely different in the Zodiac versions.

The map is received after defeating Fury and Humbaba Mistant.

Areas highlighted in red are hidden passages that do not appear on the map. The hidden area on this map shows the location of the Baknamy Merchant in the original version. 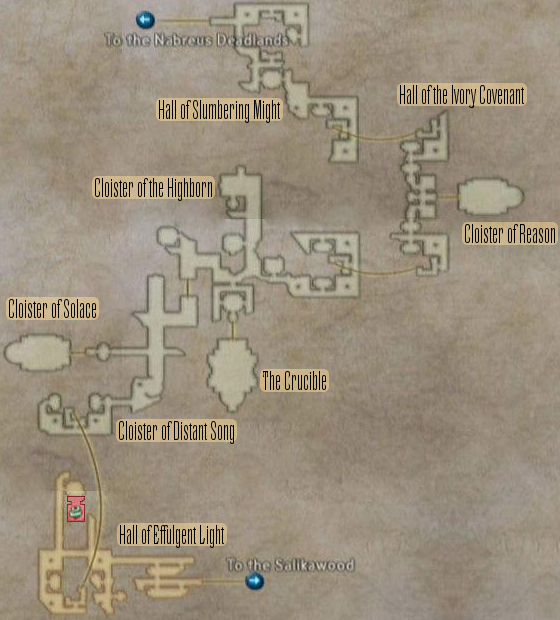 Location of Baknamy Merchant in the Zodiac versions.

The theme of Necrohol of Nabudis is called "The Forgotten Capital" (忘れ去られし都, Wasuresarareshi miyako?). It sounds similar to "Kingdom of Burmecia" from Final Fantasy IX, both being capitals left in ruin.

Though the Japanese term for the area is simply "dead capital", the etymology of the English translation is a little more obscure. [view · edit · purge]Necro- is a Greek prefix meaning "death." The "-hol" is less apparent, and may be a form of "hollow" as in several place names, rendering it "Dead Hollow". It also may simply be a respelling of "hall". The term has since been reused to refer to any dead (and usually haunted) Ivalician city. The word also sounds like necropole, which is French for "necropolis" that is used as a term for a city of the dead.