The Necrohol of Mullonde, also known as Murond Death City (死都ミュロンド, Shito Myurondo?), is a location from Final Fantasy Tactics. It is the location of the Airship Graveyard, where Saint Ajora Glabados was buried and is where the Lucavi demon Ultima can be resurrected. At one point, Loffrey Wodring calls it 'Hell'.

Folmarv Tengille, a Knights Templar in the service of the Church of Glabados, has long been possessed by Ultima's second-in-command, Hashmal. After gathering the things he needs to perform the resurrection—Alma Beoulve for use as a host body, the Virgo Stone associated with Ultima, and the Scriptures of Germonique, which tell Folmarv how to pass through the portal leading between Orbonne Monastery and the Necrohol—Folmarv travels to Orbonne with fellow knights Loffrey Wodring and Cletienne Duroi.

Loffrey opens the portal to allow Folmarv and Cletienne to pass through, but Alma's brother Ramza is in hot pursuit. Ramza defeats Loffrey at the portal, and Loffrey opens it, drawing them into the Necrohol, where Loffrey seals the portal from the inside. Ramza presses onward, defeating Cletienne outside the building where he emerges from the portal.

Folmarv makes his way to the Airship Graveyard and attempts to perform the resurection ceremony to no avail, as not enough bloodshed has occurred since Ajora's death. Ramza defeats Barich Fendsor, a machinist who had previously been killed by Ramza, but returns demon-possessed. He catches up to Folmarv, who attempts to sacrifice Ramza to Ultima. He transforms into Hashmal and unleashes his fury, but Ramza wounds him, breaking the spell on Alma that was keeping her asleep.

Furious, Hashmal takes his own life as a sacrifice to Ultima, and Alma is possessed by Ajora. Alma's soul resists, and she breaks free, separating physically from Ajora, who in response transforms into Ultima and attacks. Ramza and Alma defeat Ultima, who, after drawing power from her Ultima Demon servants to transform into a skeletal monstrosity, makes a second attempt to gather more power. This results in a massive explosion that destroys the Airship Graveyard. 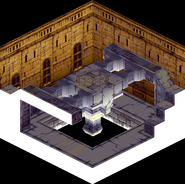 The portal to Mullonde, used by Loffrey to trap Ramza and company inside.

[view · edit · purge]Necro- is a Greek prefix meaning "death." The "-hol" is less apparent, and may be a form of "hollow" as in several place names, rendering it "Dead Hollow". It also may simply be a respelling of "hall". The term has since been reused to refer to any dead (and usually haunted) Ivalician city. The word also sounds like necropole, which is French for "necropolis" that is used as a term for a city of the dead.