Not a lot of security here. For these people, the l'Cie panic must still seem like a world away.

Nautilus is a location in Final Fantasy XIII. Known as the capital of entertainment on Cocoon, Nautilus is the home of the popular Pompa Sancta parade, and houses an amusement park featuring tame chocobos of a smaller build than their Gran Pulse variety. It is known as the "City of Dreams", and is shaped similarly to a Nautilus shell.

Nautilus is an unrevisitable location and comprises the eighth chapter.

Centered around the ever-popular Nautilus Park, the 'City of Dreams' is essentially a giant fairground built by the Sanctum for the amusement of Cocoon's citizens, Tourists visit from all corners of the world, keeping the city busy and bustling all year round.

Nautilus Park is the crown jewel of the Sanctum-built City of Dreams. it houses numerous attractions constructed with the latest technology, but the true stars of the park are the chocobos and sheep found in the family-friendly petting zoo.

With the wilds of Cocoon crawling with all manner of vicious beasts, people find the presence of the docile park animals to be a rare and reassuring change.

Sazh and Vanille arrive in Nautilus after leaving the Sunleth Waterscape. They spot an advertisement for the Pompa Sancta Parade followed by breaking news from Palumpolum, showing taped footage of Lightning, Snow, Hope, and Fang attacking PSICOM troops. Vanille recognizes Fang, but says nothing Sazh asks about it. They attend the Pompa Sancta Parade, which tells the story of the War of Transgression between Gran Pulse and Cocoon.

The two visit the Chocobo Corral in Nautilus Park, where Sazh announces he will turn himself in to PSICOM to see his son for one last time. Vanille tries to dissuade him and is about to admit her involvement with Dajh becoming a l'Cie, when they are pounded by bullets from PSICOM troops. The two escape to the Clock Tower where they destroy a Midlight Reaper and Sazh comes face to face with his son who turns to crystal. Jihl Nabaat appears and tells Sazh that his son's Focus was to find Pulse l'Cie and reveals Vanille and Fang were responsible for his son being turned into a l'Cie. Vanille runs away in tears, and Jihl encourages Sazh to pursue her. He follows her to the Fiendlord's Keep where Vanille hallucinates an image of Sazh shooting her.

Sazh aims his gun at Vanille but his Eidolon Brynhildr appears and the two defeat it together. After the battle, Sazh again turns his gun on Vanille, but is unable to shoot her, acknowledging it will not help his son. Sazh turns the gun on himself but is unable to end his own life. Jihl arrives with PSICOM troops and captures both Vanille and Sazh, telling them that the Sanctum will build a memorial in Eden and use Dajh as a monument to "the boy who saved Cocoon." After Jihl renders Sazh unconscious, he is carried away in a coffin and Vanille follows behind in Purge attire. The two are taken aboard the Palamecia and placed in confinement.

Flight of the Chocobo[]

In the Chocobo Corral, the player must find Sazh's chocobo chick.

This section about a quest in Final Fantasy XIII is empty or needs to be expanded. You can help the Final Fantasy Wiki by expanding it.

The themes "Nautilus" plays in Nautilus, while "Chocobos of Cocoon - Chasing Dreams" and the battle theme, "Feast of Betrayal" play in Nautilus Park.

A piano arrangement of "Nautilus" is included on the Piano Collections: Final Fantasy XIII album.

Although an key art exists featuring the entire party at Nautilus, only Sazh and Vanille visit the place in the game. The Chocobo Park area that cannot normally be accessed other than in cut scenes can be made playable via hacks.

According to the Final Fantasy XIII Scenario Ultimania, the Fiendlord's Keep was intended to be a haunted house-type attraction where the goal would be to go through the castle, overthrow the demon king and take his throne. 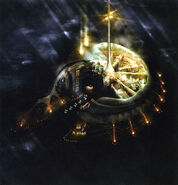 Siren shown on the screen in Nautilus.

The park's name may derive from the Final Fantasy III airship of the same name. The city is also shaped similarly to a Nautilus shell.

Nautilus being the "City of Dreams" shares a similar naming scheme with Dream Zanarkand and Yusnaan, both dubbed "The City that Never Sleeps," as well as Insomnia.

There is a boy NPC within the first section of Nautilus who chases after some other children. If the player is close to him he will eventually utter "Run, run, or you'll be well done!", a quote from Kefka Palazzo in Final Fantasy VI.

A photo of Nautilus can be found in Hope's house in Palumpolum. In Final Fantasy XIII-2, Nautilus is mentioned when Snow and Serah say that Mog is like a theme park mascot.