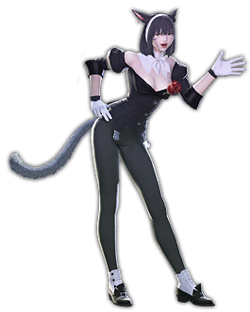 Nashu Mhakaracca is a minor non-playable character in Final Fantasy XIV. She is a female Miqo'te comic-relief character, sidekick to Hildibrand Manderville, and older sister to Songbirds member Masha Mhakaracca. Together she and Hildibrand are involved in quests related to the adventurer's inn rooms in version 1.xx, and the Inspector Hildibrand story in 2.xx and in 3.xx.

Nashu is a Keeper of the Moon Mi'qote with black hair, gray eyes, with a bandage on her left cheek. She wears a pink half-robe with gray stockings and shoes. While believing that Hildibrand died, Nashu changed her attire into a business dress similar to the man with the intent to carry his legacy, but switched back to her old attire after he was revealed to be alive and regained his memory. She reappears in the business suit during the "episode previews."

While those who meet Hildibrand learn of his idiocy and lack of competence soon after, Nashu is in awe of his "talents" as an investigator. Proving to be as much of a scatterbrain as her employer, taking extremes on matter, Nashu fixates on pumpkins and has a short attention span.

After Hildebrand was presumed dead following his ill-conceived trip to Dalamud, Nashu resolved to carry out her employer's work as an inspector. With the aid of the adventurer, she hopes to solve the mystery of the dapper zombies. It is discovered the zombie leader is none other than Hildebrand believing himself to be one of them due to amnesia. Nashu uses bombs in a risky gambit to restore his memory, which works. Nashu provides Hildibrand with a new set of clothes and resumes her role as his side-kick as he investigates the phantom thief of a thousand faces.

Nashu has a sister named Masha Mhakaracca who is an up and coming Songstress for the song and dance trio of troubadours called the 'Songbirds'. During the 2016 Little Ladies Day event, Masha was one of the Songstresses performing for the city of Ul'dah along with her two other companion entertainers, Ulala and Narumi. Players were able to vote for their choice of leadership for the Songbirds, with Masha being one of three options.

Hildibrand and Nashu were created for the quests required to unlock private inn rooms, which were released March 8th, 2012 as part of patch 1.21. Due to positive fan reception, they have become recurring characters for inn-related quests, and reprise in A Realm Reborn as part of their own side story. The duo was originally not planned to appear in Heavensward, but due to fan demand, quests involving them were implemented during it's patch cycle, though shorter and lacking any attached trials.

Twitter pages have been made for both: Hildibrand and Nashu Mhakaracca.

Nashu appears on a Triple Triad card with Hildibrand.