Narshe is a neutral city. We want no war here, but that @#$% Empire won't listen!

Narshe, also known as Narche, and titled "Colliery City Narshe" (炭坑都市ナルシェ, Tankō Toshi Narushe?) in the Japanese version, is a city in Final Fantasy VI. It is a coal mining town at the northern edge of the world, governed by the Elder of Narshe. The town is one of the game's most important locations—it is where the player party makes their base of operations before they have an airship, and several storyline events, including the beginning, take place here. Situated in the mountains and affected by snowy conditions, Narshe is the only independent city to resist invasion attempts by the Gestahlian Empire.

According to a timeline in the Settei Shiryō-hen guide book, Narshe formed an independent political system 150 years ago. Around 20 years ago it refused to sell coal to the invading Gestahlian Empire with armed resistance, but a pact of mutual peace is agreed upon. The canonity of this timeline is questionable, however.

In the World of Balance Narshe is a neutral city that strives to keep the war between the Gestahlian Empire and the Returners away, but when the miners dig up a frozen esper they attract the attention of both factions. The Empire sends Terra, Biggs and Wedge to raid the town and the Narshe guards fail to stop them. Once Biggs, Wedge and Terra reach the esper, it kills Biggs and Wedge and frees Terra from imperial control by breaking the Slave Crown she was wearing. Terra is rescued by Arvis, a Returner living in Narshe, who helps her escape. The guards catch up to her and corner her in the mines, but Locke Cole, a "Treasure Hunter", along with Mog and ten other moogles, rescue her, and Locke takes her out of Narshe. 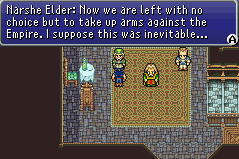 When Terra returns in the company of Edgar and Banon, Arvis attempts to convince the town to side with the Returners to no avail. Locke returns from the imperial-occupied South Figaro and, with information supplied by the traitor Imperial general Celes, warns the townspeople of an Imperial force on its way to seize the esper, led by Kefka. The Elder of Narshe accepts the Returners' help and the rebels assist the Narshe Guards in defending the town and drive Kefka off in the Battle for the Frozen Esper.

In the aftermath, Terra confronts the frozen esper and transforms into an esper herself, flying away. Banon and a handful of Returners remain in the town while another group departs to search for Terra. Terra is recovered and the people of Narshe agree to join the Returners, giving them the strength to plot a direct attack on the imperial capital Vector. Vector slips into the hands of the allied forces after co-belligerent espers decimate the city, forcing the Empire to sign a temporary peace treaty with the Returners. The allies subsequently withdraw from Vector.

After the end of the world Narshe is overrun by monsters, and most of the townsfolk have fled or been killed. It is never directly stated how this happened; one possibility is that Kefka, having suffered his first defeat in Narshe, made the town one of the first targets of his Light of Judgment. Many doors are locked and require Locke in the party to open them. The owner of the weapon shop refuses to leave Narshe and has locked himself in, and will give the party Ragnarok if talked to. Another old man who has stayed behind will hand over the Cursed Shield if the party finds him in his basement. Mog has returned to the moogle home within the mines. The frozen esper can still be found where it was left after the battle, and the party can obtain its magicite by awakening it and defeat it in battle. A secret passage to the Yeti's Cave behind the cliffs of Narshe opens and Umaro can be recruited into the party, provided Mog is with them. Whether Narshe is repopulated after the final defeat of Kefka is unknown.

The town has the following sub-locations: inn, weapon shop, armor shop, relic shop, item shop, Arvis's house, treasure room, house on the west side, Adventuring school and Elder's house. In the World of Balance, people appear outside, but they are replaced by random enemy encounters in the World of Ruin. In the World of Ruin, most of the doors are locked and require a person with thief skills to unlock.

The Beginner's Hall can be first accessed on the way out from the Narshe Mines. This place has three rooms and a healing pot the player can use to heal before proceeding on to the world map. The first room teaches players the basics, and the other rooms teach the player advanced techniques.

The mines form an expansive system of caves leading through and above the cliffs overlooking the town. There are three distinct sets of caves: one leads from just inside the town's entrance to Arvis's house, and includes the moogles' home.

The second set of caves can be found north of the town and leads onto the cliffs where the frozen esper is located. A rear passage is where the esper is first found. The third set of caves, known as the Yeti's Cave, is accessible after unthawing Valigarmanda in the World of Ruin, and leads to Umaro's home. A drop-off within the cave drops the party back on the path leading up to the cliffs. In the World of Balance, Umaro can sometimes be seen poking his head out from this hole in the cliffs.

During the third visit to the town the player can find Lone Wolf in the house on the hill on the east side of town. The player must pursue him into the mines and onto the cliffs where he holds Mog hostage. If the player holds still for a few moments after approaching once, Mog will struggle and knock himself and Lone Wolf to opposite sides of the cliff. The player can rescue Mog and recruit him to the party, or can approach Lone Wolf to take the Gold Hairpin he had stolen earlier. If they take the latter option Mog falls and can only be recruited in the World of Ruin.

In the World of Ruin, Mog can be found in the moogle cave in the depths of the Narshe's mines and finding him will prompt him to join or rejoin the party depending on the action the party took in the World of Balance.

In the World of Ruin, a man in the basement of a house on the west side of town will give the player the Cursed Shield that inflicts a slew of negative status ailments, stat penalties and elemental weaknesses on the equipped character. If a player fights 256 battles with it the curse will be lifted and it becomes the Paladin's Shield, the best shield in the game.

A fast way to dispel the curse is to fly to Solitary Island and fight the Peepers; since they have innate Sap and only one HP, it will die on its first turn. The players must be careful when fighting in the desert, as a Black Dragon may occasionally show up.

In the World of Ruin, the owner of the weapon shop in his back room shows the party a glowing stone and comments on the power of a sword forged from it. The player can either take the magicite Ragnarok, or have it be forged into the sword Ragnarok. The magicite is the only magicite to teach Ultima, the most powerful spell, and the only way to use Metamorphosis to turn enemies into items. The sword meanwhile is one of the most powerful weapons and can be bet at Dragon's Neck Coliseum to win an even more powerful weapon, the Lightbringer.

In the snowfields atop the town the player can find the Ice Dragon, one of the eight legendary dragons. Beyond the snowfield at the cliff, the player can find the frozen esper Valigarmanda and battle it, thawing it to obtain it as a magicite. Defeating Valigarmanda opens a passage to the Yeti's Cave where Umaro lives. Defeating Umaro with Mog in the party will have Umaro join.

The snowfields above the town are the only location where Mog can learn the Snowman Rondo Dance. Because no random encounters occur here in the World of Balance, Mog cannot learn the Dance until the World of Ruin.

For monsters located in the mines and on the cliffs, see Narshe Mines, Narshe Cliffs, or Yeti's Cave

Narshe was going to have a chocobo stable, situated right next to the Beginner's House. It didn't make the cut for the final version of the game. The inn also appears to have a pub sign right above it.

"The Mines of Narshe" is the track used as the background theme for Narshe, but is replaced by the theme "Dark World" in the World of Ruin.

The town of Narshe appears in the background of the Narshe Outskirts stage.

The Snowfield Mining Town in the Kolts Region is based on the city of Narshe. As part of the January special events of "Typhon Attacks" and "Deathgaze's Onslaught", four locations from the game were added, including the Snow Fields (which use the same background as the Snow Fields of Narshe).

Narshe is the setting for two regular dungeons and is also featured in the Challenge Events A Fateful Coin Toss and Back to the Skies. In Assassin in Black Narshe is the name of a "+++" difficulty battle.