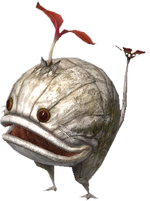 Nanochu (ピコチュー, Pikochū?, lit. Picochu) is a recruitable monster from Final Fantasy XIII-2. It can be obtained once by throwing Mog with "Improved Moogle Throw" Fragment Skill activated at an elevated tree on the Clearwater Marshes side of the trench in the Archylte Steppe -??? AF-. It can be re-obtained as a drop from Valfodr at level 70.

Nanochu is a relatively weak monster stat-wise. Using only Potent materials it can achieve just 3590 HP, 463 Strength, and 507 Magic. Its development is geared towards offense, being able to learn Bravery, Bravega, Faith, Vigilance, and all four En— spells. Even though it's a one-time monster, it might be a good idea to infuse Nanochu into other Synergists who lack offensive abilities. However, due to its infusible Pack Mentality skill, it may be wise to infuse him into something else.

Even though it has low HP, it has a lot of potential to become an offensive Synergist, as Noel can settle the defensive buffs. One way to make Nanochu not so fragile is to infuse Resist Physical: +36% and Resist Magic: +36% and HP: +30%.

It is called Picochu in the Japanese version. [view · edit · purge]The prefix "pico-" attached to the family name of Ochu. It is possibly meant to sound similar to Pikachu from Pokémon. [view · edit · purge]Pico (symbol p) is a unit prefix meaning one trillionth. Used primarily with the metric system, this prefix denotes a factor of 10−12 or 0.000 000 000 001.

Retrieved from "https://finalfantasy.fandom.com/wiki/Nanochu_(Final_Fantasy_XIII-2)?oldid=3205926"
Community content is available under CC-BY-SA unless otherwise noted.