A precious and extremely rare sword. Once seen in a great tower in another world.

Nanatsusayanotachi is a 2-handed Katana usable by Samurai level 72 or higher. It has damage 77 and delay 420, a +7 bonus to both Strength and Dexterity, and enhances the effect of Zanshin to activate 100% of the time. It drops from Pandemonium Warden.

Seven has a sword icon before its name. It can be dropped from Haniwa (rare) located in the Central Shrine. It appears rarely and randomly in lowest area of the shrine.

The sword has 7 uses and also increases a Robot's HP by 144. The damage formula for Seven is the user's Str x15. The user will attack up to seven times, depending on Agl against one group.

When not fighting for your life, this sword doubles as a great coat rack.

Nanatsusayanotachi grants +7 to Attack. It can be equipped by Samurai, Ninja, and Auron. 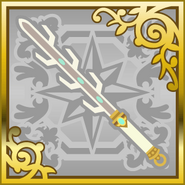 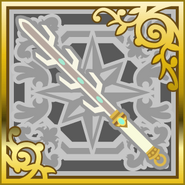 [view · edit · purge]The Seven-Branched Sword (七支刀) Shichishitō/Nanatsusaya no Tachi, is a sword of continental manufacture believed to be identical with the artifact of that name, a gift of the king of Baekje that has been bestowed upon a Yamato ruler as a gift who is mentioned in the Nihon Shoki in the fifty-second year of the reign of the semi-mythical Empress Jingū. It is a 74.9 cm long iron sword with six branch-like protrusions along the central blade.