Haley Alexander (A Realm Reborn 2.0)
Erin Fitzgerald (A Realm Reborn 2.2-2.55)
Joanna Ruiz (Heavensward onwards)
Nanamo Ul Namo is the Sultana of Ul'dah, the seventeenth in the line of Ul, the royal family of the city-state in Final Fantasy XIV. Though nominally the head of state of Ul'dah, her power is limited by the Syndicate. Most of her influence is due to her right-hand man Raubahn Aldynn, General of the Immortal Flames.

As the Battle of Carteneau raged in Mor Dhona, Nanamo remained in Ul'dah. Following the advice of Thancred Waters, she went to the Arrzaneth Ossuary to pray to The Twelve. As Dalamud ruptured and Bahamut unleashed his fury upon Eorzea, Nanamo saw a pillar of light release from the mark of Thal before falling unconscious. In the days that followed, she was instrumental in restoring order to the city.[1]

The Sultana delivers a speech during the Carteneau memorial service, propped on Raubahn's arm. She later presides over the Eorzean Alliance meeting discussing the terms of Gaius van Baelsar's ultimatum (an imperial Legatus of the Garlean Empire on a quest to conquer Eorzea). Though the leaders considered capitulating in light of the struggles following the Calamity, the return of Minfilia and the Scions of the Seventh Dawn convinces them to retaliate against Gaius with Operation Archon.

After Alphinaud pulls strings to arrange an audience for the Doman refugees, Nanamo, Raubahn, and the Syndicate hear Yugiri's testimony. Despite being moved by her plight, Nanamo and Teledji Adeledji cannot sway the other Syndicate members in the face of Lord Lolorito's filibuster, who turn down Yugiri's request for asylum. They later learn that Teledji Adeledji had stirred up unrest in Ul'dah among the other refugees in response to the Domans being turned away. During a confidential meeting with Alphinaud and the Warrior of Light, Nanamo reveals the Carteneau Flats holds a secret–"Omega"–and the Carteneau Reclamation Bill was likely the reason Teledji incited the riots, as a means to get to it.

Nanamo Ul Namo holds a meeting with Kan-E-Senna and Merlwyb Bloefhiswyn about her plans to dissolve the Syndicate.[3] They have the same conversation with the Warrior of Light during the feast after the fall of Vishap, but the Sultana collapses after drinking the wine.[4] When Teledji enters the Royal Chamber and takes notice of her, having secretly laced her wine with a toxin, he claims she has been poisoned and accuses the Warrior of Light and the Scions of regicide.

Lolorito had learned of Teledji's assassination plan and had Nanamo's servant swap the poison with a potent sleeping potion to use the event to remove both the usurper and Raubahn from power. But after Raubahn was rescued by the Warrior of Light, Alphinaud and Yugiri Mistwalker, they take him into hiding in the Waking Sands, where Dewlala Dewla informs them about how Lolorito got wind of Teledji's scheme and took advantage of it. She also confirms that Nanamo lives. Raubahn remains in hiding while Yugiri begins searching for Nanamo's servant. After finding her, Raubahn summons Warrior and Alphinaud. The servant doesn't get the chance to explain herself, when Lolorito arrives with Dewlala. Lolorito admits his scheme, but also adds he had no desire to have Nanamo killed, thus he conspired to ensure she survives. With Raubahn more than willing to cut Lolorito down, Dewlala stops him, and Lolorito gives the antidote to Raubahn, also reinstating him as the leader of the Immortal Flames and his position in the Syndicate. Raubahn lets Lolorito walk free.

Raubahn goes to Nanamo's chamber's in Ul'dah to find her in deep sleep. By using the antidote, she wakes up, and Ul'dah begins to return back to normal following the failed revolution.

After the fall of King Thordan, Nanamo presides over the ceremony where Ishgard rejoins the Eorzean Alliance.

After the liberation of Ala Mhigo, Nanamo invites the Warrior of Light to her. She reveals her intention of aiding the Ala Mhigan restoration and also her intention of releasing Raubahn from her service, knowing that in his heart he longs to remain in his homeland. She asks the Warrior to accompany her on a little adventure, in order to learn how best accumulate funds for the restoration in a way that benefits both Ala Mhigo and Ul'dah. After visiting various places in Thanalan, and even as far as Kugane, she is led to consult Lord Lolorito, much to her chagrin. A meeting is arranged at the Waking Sands, where Lolorito is somewhat amused, but acknowledges, how Nanamo has grown both as a person and a leader. In the negotiations, they decide to help restore the Saltery that was destroyed during the Garlean invasion, as its location close to Ala Mhigo and the surrounding region would help Ala Mhigans find work and residency, and the resulting trade would boost the economy of both city-states.

Later, Nanamo travels to Ala Mhigo to meet Raubahn in person. With a heavy heart, she releases Raubahn from her service. Raubahn protests, but Nanamo adamantly holds with her decision, claiming she is no longer the naïve sultana she once was, having learned to speak out her voice within the Syndicate and able to control the Monetarists.

As the tensions between the Eorzean Alliance and Garlean Empire reach a boiling point, it becomes clear that Garleans will launch an assault to retake Ala Mhigo. The Alliance enlists assistance from Doma, and in order to buy time for their arrival, the Alliance arranges a parley with the Empire. Nanamo takes part in the parley as the representative of Ul'dah. The Garlean representative is the emperor Varis zos Galvus himself. Nanamo is the first to address the emperor. As each of the Alliance leaders plead their cases to Varis, he rebuffs them all, claiming the only course for the world to survive from constant primal threats and other dangers, all of the world must join the absolute Garlean rule. Nanamo is utterly shocked, how Varis has no qualms of causing mass death and destruction to achieve this. The parley ends with the Alliance not agreeing to Varis' terms.

This section in Final Fantasy XIV: Shadowbringers is empty or needs to be expanded. You can help the Final Fantasy Wiki by expanding it.

Upon hearing the Scions request for refined adamantite in order to build up the starship Ragnarok, Nanamo sends envoys from Ul'dah to seek out shards of Dalamud for the material, and assigns Lolorito to acquire useful relics from more unconventional sources, and deliver everything found to Sharlayan.

While it is true that man succumbs all too often to anger and avarice, he may yet overcome his baser instincts through the forming of bonds with others.

Nanamo's voice from the past

Nanamo's voice is one of the many memories of the Warrior of Light's comrades who encourage them in Ultima Thule to walk forward and face the end. 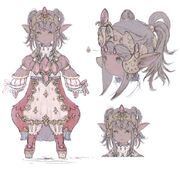 Nanamo is a Dunesfolk Lalafell with pale skin and green eyes. She is fair-skinned, notably more so than most other inhabitants of the city, with only her eyes to distinguish her as a Dunesfolk.

On occasion, Nanamo takes on the civilian guise of "Lilira, the merchant's daughter" to venture outside the palace and observe Ul'dah's citizens without taking notice.[5] Lilira is encountered by adventurers who start in Ul'dah and in patch 4.1 while seeking the guidance of others in Thanalan.

Nanamo is kind-hearted and generous, and a mindful leader who cares deeply for all of her people. In contrast with the strict material-driven mindset of the Ul'dahn ruling class, Nanamo believes that all of her people, rich and poor alike, deserve fair and equal treatment, and is in favor of a democratic government. She is frustrated at her status as a puppet leader and her inability to do much to ease the suffering of her subjects.

Following the Ul'dahn Revolution and attempt on her life, Nanamo has matured and become more independent, resolving to become the leader her people deserve and need. Even Lolorito is impressed with her growth when they discuss the situation of rebuilding Ala Mhigo's economy. She takes initiative in the Eorzean Alliance, being either a spokesperson or a representative on their behalf. Nanamo has accepted that she can't rely on Raubahn forever, and must stand on her own for the sake of her people and also for him, as following Ala Mhigo's liberation, she saw his homeland needs him more than she does. Though parting was sad for both of them, they ultimately remain good friends. By the time of the Final Days, Nanamo's political influence grew, and she learned how to convince Lolorito to help carry out important missions on her behalf.

Nanamo views the Warrior of Light a trusted confidant, informing them of her plans to abdicate in favor of a democracy, and of her intention to release Raubahn from her service.

Nanamo appears on a Triple Triad card in the version available via Final Fantasy Portal App.

Nanamo is referenced along with Tataru Taru when the protagonist assumes that the Mahlwon race are Lalafell.

Concept art of Nanamo suggests that in an earlier design phase she was going to be darker-skinned like many other Ul'dahn residents, though retaining her light hair.

Nanamo has gained memetic fame for the way she tends to "ride" on Raubahn's arm during public ceremonies, leading to jokes that Lalafells should get access to Highlander "mounts".

Revenge of the Chefsbane has the Warrior of Light prepare a banquet for Nanamo during a state visit to Admiral Merlwyb Bloefhiswyn. If this quest is completed between the main scenario quests

The Parting Glass and

Awakening in Ul'dah, Nanamo and Lolorito will be anachronistically present at the state dinner, despite Nanamo presumably being dead in part due to Lolorito during this period. This may be because the quest chronologically takes place around the time of Operation Archon, regardless of the actual order a player completes them.

Nanamo is voiced by Mariya Ise in the Japanese version, who also lends her voice to Tataru Taru.

Nanamo in Tales From the Calamity - The Sultana's Seven.[1]

Nanamo praying in the Thaumaturge's Guild in Tales From the Calamity - The Sultana's Seven.[1]

Nanamo and Raubahn addressing the citizens of Ul'dah.

Nanamo in the Royal Promenade.

Nanamo on the Death Unto Dawn patch artwork.