Relm: I couldn't miss the chance to practice my drawing!
This article is in need of a few pictures. Perhaps you can help by uploading a picture of screenshots of Namingway's locations.

When all is said and done, it's what's inside that truly matters. Still, a catchy name never hurt.

Namingway (ネミングウェイ, Neminguwei?) is a recurring non-player character in the Final Fantasy series. An odd creature with rabbit-like features, he often lets the player change the name of something.

Namingway is a Hummingway, and he appears in various towns around the world, often in the training rooms, and in the end even on the Red Moon in a cave full of Hummingways, which is where he originally came from. His purpose is to offer to change the names of party members. Characters can have their names changed multiple times.

Namingway is the only non-playable character besides Golbez to have a portrait when speaking in the Complete Collection version of Final Fantasy IV.

In the 3D remake, because of the voice-acting, Namingway can no longer change the characters' names. Unable to deal with this, Namingway embarks on a world tour, seeking new meaning to his life. In each town he is encountered in, Namingway gives the player an item or asks a request of them. At one point, he even battles them himself. The full story of Namingway involves him becoming a cartographer, a musician, and an outdoorsman. He begins courting two women, and when he finally chooses one of them to be with, he discovers she is cheating on him. Namingway thus abandons her and meets another woman, whom he marries.

Namingway is friends with the Fat Chocobo, who takes over the various devices that Namingway gives the player access to. Namingway appears in the following locations. Namingway will not appear in the next location until met in the preceding location and the subquest for that location completed.

Namingway appears in various locations around the world at the end of each chapter. Due to being unable to change names, he instead changes his name to Challengingway and gives access to the Challenge Dungeons.

Tradingway appears in the ??? location on the True Moon, and will exchange pieces of Adamantite for any Adamant equipment. He also pops up at various times throughout the game to sell items.

Namingway appears on a Tetra Master card. The card can be shown to a man in Daguerreo who will offer to change the name of one of the party members. It is arguably the rarest card in the game after Ozma, with only two chances to get it. One is found in Kuja's room in Desert Palace (near the teleporter, only after Eiko has been kidnapped).

The other chance is in Treno, during the card tournament. When the player is in control of Vivi, they are given the option of "going home", or staying in Treno. Choosing the latter will give Zidane a different opponent in the card tournament's second round, who holds the Namingway card. It is possible to win more than one Namingway card from him if he uses numerous copies in one hand.

In the mobile and Steam versions, the sprite on the card has been updated (

) to the one in Final Fantasy IV: The Complete Collection.

Namingway appears as a minion that can be obtained using the code that came with Encyclopedia Eorzea.

Namingway is an non-playable character that lives in a house west of Arbor. When asked, he will change the name of the magic spells the party has obtained.

Namingway makes a cameo as a tutor from the in-game manuals.

Namingway in The After Years. 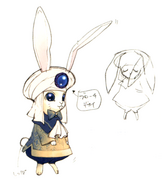 Akira Oguro artwork of Namingway in his classic garb. 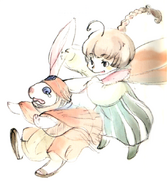