The Namazu are a short, chubby, catfish-like tribe native to Othard. Unlike most non-human races, they are not associated with any known primal. The Namazu worship a fish-like entity known as "the Big One", though there is no evidence it has ever been summoned. Their belief in the Eastern kami suggests that they worship or otherwise believe in deities such as Susano and Tsukuyomi.

They have a habit of repeating their affirmations (i.e., "yes, yes") and make squeaking sounds as they walk. Tea is a known intoxicant to the Namazu, making Xaela tea ceremonies difficult for them to perform. They have stubby little arms, making the traditional dances of other bipedal races complicated.

While the Namazu maintain relatively friendly relations towards the Far East, its denizens and the Warrior of Light show indifference if not disdain towards them, due to their silly nature. During their tribe questline, this extends to the Mol, who rented the structures of Dhoro Iloh to the Seven Hundred Seventy-Seven only due to association with the Warrior of Light.

Through Qitari history, the Namazu are known to have existed in the First of the Source's reflections, but became extinct after the Flood.

Namazu can be engaged in combat in Yanxia in and around the Valley of the Fallen Rainbow, where they are known as Ebisu Catfish, armed with pitchforks and tridents. These Namazu are nude, having forsaken the garments that mark them as "civilized" to partake in banditry. A notable Rank B Hunt Mark named Gyorai Quickstrike can be found in northern Yanxia, who may be marked as a weekly Hunt Mark for Centurio seals.

There are three minions featuring the likeness of the Namazu. The

Wind-up Namazu can be obtained in Gazelleskin Treasure Maps, whereas

Attendee #777 can be obtained upon reaching Rank 5 with the Namazu tribal quests for 7 Namazu koban. The elusive

The Gold Whisker can be obtained from

The Hidden Canals of Uznair. Clothing related to the Namazu can also be purchased, including their stylish neck bells and a costume head.

A mount of eight Namazu carrying a celebration mikoshi can be obtained from the Namazu tribal quests for 12 koban. When flying, the Namazu dangle off the wooden beams. A golden mikoshi, known as the

Namazu are featured in numerous in-game housing items, such as stuffed toys, in-house merchants, and a burning effigy for the front yard. 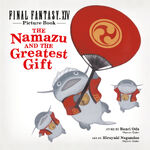 Square Enix has offered fans plenty of real life merchandise involving the Namazu. In 2018 a USB powered desk light in the shape of a Namazu was sold by Taito, as well as a deluxe golden version. Taito also assisted in selling Namazu plushies. In 2022, a picture book titled Final Fantasy XIV: The Namazu and the Greatest Gift (ファイナルファンタジー14の絵本 ナマズオとだれもみたことのないもの) was published and sold on the Square Enix website. It was written by lead story designer Banri Oda, and illustrated by concept artist Hiroyuki Nagamine.

Namazu (鯰) or Ōnamazu (大鯰) in Japanese mythology is a giant catfish who causes earthquakes. He lives in the mud under the islands of Japan and is guarded by the god Kashima who restrains the catfish with a stone. When Kashima lets his guard fall, Namazu thrashes about, causing violent earthquakes.

The Namazu during their festival

Dhoro Iloh, the site of the festival 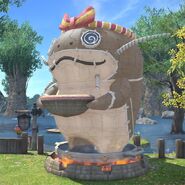