Cid Pollendina: Oh, shut up and help me remodel the Nam-Yensa Sandsea page!
Please expand this article into a full one. The following tasks need to be completed:

The Nam-Yensa Sandsea is a location in the land of Ivalice in Final Fantasy XII. Just west of the Ogir-Yensa Sandsea, it is the only way to access Tomb of Raithwall.

The desert in the west of the Jagd Yensa. Fine sand beats in waves against the feet of the rolling dunes of this region which, together with the Ogir-Yensa Sandsea, is called the Great Yensan Sandsea. To the west of the Nam-Yensa lies the gorge known as the Valley of the Dead, so called because it has been the scene of many an ill-starred adventurer's demise.

While trekking across the Sandsea towards the Tomb of Raithwall, Vaan and the party encounter a Sandsea Moogle who claims a Urutan-Yensa had asked for help in defeating their blood-enemy, the Urutan Eater, and in exchange is ready to reward them with a treasure. The party searches through the Nam-Yensa Sandsea where they find a group of Urutan-Yensa fighting the Titantoise, and proceeds to defeat it.

When they return to the Sandsea Moogle, he says the Urutan wants to give a reward, but they need to find him. The party searches for the Urutan, and stumble upon a rare gathering of Urutan-Yensa. There, they find the one asking for help being tried for shaming the community by asking help from outsiders. The Queen of the Urutan "condemns him to dust", and the Urutan burns and vanishes.

The Sandsea Moogle tries to plead his case, but the Queen warns the moogle she might have punished him too, though merciful that she is, the Queen spares his life. Once the Urutans leave, the moogle notices a rare flower blossoming. He believes this is the treasure the rogue Urutan-Yensa had wanted to show them; a flower that is detested by the Garuda for its smell. The party picks some Eksir Berries from the "Rogue Urutan Flower", and continue their journey.

The Nam-Yensa Sandsea is located to the west of the Ogir-Yensa Sandsea, in the Jagd Yensa region. To the west in the Valley of the Dead lies the Tomb of Raithwall.

The Nam-Yensa Sandsea is of sand terrain, which makes all Earth attacks 20% more powerful than usual.

In the original version, plenty of different equipment can be found in randomly spawning treasures. Recovery items, such as Potions, Hi-Potions and Ethers are also common. With the Diamond Armlet equipped, the common item treasure is Knot of Rust, and the rare item is an Elixir or a Holy Mote.

In the Augur Hill region the treasure that spawns nearest to the exit to Ogir-Yensa may contain the Iron Helm, and the treasure a bit to the west and north from that can be the dagger Chopper. The treasure on the little "island" in the middle of the area can be the Leather Gorget. In the Urutan Yensa Sea, the Chopper can again be found in a treasure, and the treasure in the section furthest to the east of the map may have the Lambent Hat. The westernmost treasure in the Yellow Sands area can have the Killer Bow. The dead-end bit at the Demesne of the Sand Queen may have the Iron Armor.

In Simoon Bluff, there is an oil rig to the west of the entrance to the area. At the very end there are two treasures that can have the Cypress Pole and Amber Armlet. Wizard's Staff may be found on the ground next to the oil rig, and the treasure in the westernmost section can be the Windbreaker. The treasure in the northeastern section is always the gambit for Foe: flying, unless it is gil. The Withering Shores can only be accessed from the Zertinan Caverns. The treasure that spawns randomly nearest to the entrance to the cave is either the Argyle Armlet or the Ancient Sword if the treasure is items rather than gil. The treasure on the stairs leading up is 90% gil, but if it is items, it can be an Elixir. The treasure at the very top can be Rose Corsage or Vega.

The Wyvern Lord is a Rank II Mark that becomes available after the events of Dreadnought Leviathan when Ashe joins the party. A breed of Avion, Wyvern Lord is encountered in the Simoon Bluff area, petitioned by Sherral in Rabanastre's weapon shop.

The Belito is an Elite Mark petitioned by Montblanc in Rabanastre that becomes available after the events in Draklor Laboratory. It is said to be a sandstorm creating creature that lurks in the Nam-Yensa Sandsea, its bill depicting a red-skinned Mirrorknight. However, the truth of the Mark's nature becomes apparent when the party arrives at the site of the battle.

To find the mark, the player must begin in Ogir-Yensa Sandsea's Central Junction and follow a path through Zertinan Caverns. The northern exit will lead to a dead-end in Nam-Yensa Sandsea's Withering Shore, where Monid is found and a cutscene will initiate the battle.

The player must have spoken to the "Huntmaster" in Phon Coast and defeated Thalassinon to trigger the start of the Rare Game quest. Afterward there is a 40% chance Victanir will appear in the western portion of the Yellow Sands area (the area to the left of where the Urutan-Yensa spawn). Victanir will be almost invisible, so the player cannot see it until they are close. Once they run into Victanir, it will become visible.

Imdugud spawns in the Withering Shores zone in the portion of the zone accessible only through the Zertinan Caverns. After the player defeats every Bagoly in the area, the player must then position the party on the center of the circular platform and wait a few seconds (the platform where the party faces Ba'Gamnan for the second time). Imdugud will spawn near the shore on the opposite side of the zone and fly over towards the platform.

Exact positioning on the center of the platform is key to spawning this enemy. If the player isn't in the exact position, Imdugud can take a long time to appear. If the player takes too long to defeat it, it will fly away temporarily, though it will not heal itself.

Megabomb will appear in the Demesne of the Sandqueen area after chaining 21 or more foes.

All three themes were composed by Hitoshi Sakimoto.

The map can be found on a small island between two bridges in Augur Hill. In the Zodiac versions, the map is moved to Platform 1 - East Tanks in the Ogir-Yensa Sandsea.

Map from the original Final Fantasy XII with all treasure information. 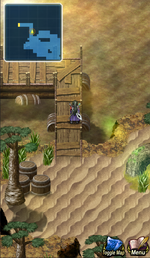