Cid Pollendina: Oh, shut up and help me remodel the Nalbina Dungeons page!
Please expand this article into a full one. The following tasks need to be completed:

Relax. It's just a corpse. Jump at every little thing down here and you'll wear yourself out. (yawn) It's not even a proper dungeon. They just sealed off the bottom level of the fortress. Take a look around. We're not the first they've thrown down here.

The Nalbina Dungeons is an unrevisitable location in the land of Ivalice in Final Fantasy XII. It is a large portion of the fortress that dominates the city of Nalbina.

Escaping the Nalbina Dungeons in The Zodiac Age awards the "A Traitor Redeemed" trophy/achievement.

A great dungeon, created when the Archadian army sealed off the lower levels of Nalbina Fortress. Originally a complex lowtown region. In addition to the usual collection of petty thieves and murderers, its inmates include political dissenters and prisoners of war from the Dalmascan and Nabradian armies, all thrown together without discrimination, separation, or order. An oubliette has been created in the depths of the fortress to hold those prisoners whose cases await judgment before the Court of Archadia.

Nalbina Dungeons are the lower portion of the Nalbina Fortress, which has been sealed off and turned into a prison. The Oubliette is a chamber deep beneath the dungeons and is where Captain Basch is kept imprisoned.

The mechanism of the prison is rather unique as each prisoner is placed in cages hanging from certain chambers. In an interrogation, one can simply pull a level and choose which cage to bring forward for the interrogation process. Further down the Oubliette is the cavern leading to the abandoned Barheim Passage.

In the original versions, Nalbina Dungeons contains a forbidden chest (labeled in red below) that, if claimed, prevents the player from obtaining the Zodiac Spear (the most powerful weapon) in the Necrohol of Nabudis. The southernmost chest in the Confiscatory (where the party reclaim their lost equipment), the treasure that always contains gil, is forbidden. The other two treasures that contain a gambit for self-targeting and a Tourmaline Ring are not forbidden. The player can save their game outside to make sure they can reset if they take the wrong treasure by accident.

All the treasures in the Stockade are Knots of Rust. The treasure nearest to the Confiscatory in the Black Watch area can have Chromed Leathers. The northernmost treasure in the same area can have a gambit for ally: HP < 60%. The treasure nearest to the exit (where the party follows Judge Gabranth) can have Foe: targeting ally gambit. Mostly the treasures are all Knots of Rust unless they are gil, but there are also a few Motes and an Ether that may pop time to time.

The concept of forbidden chests was removed in the Zodiac versions, and the treasures are different. There is still a Tourmaline Ring at the Confiscatory, and some low level equipment in the Black Watch.

All chests in this location do not respawn.

All chests in this location do not respawn.

Vaan and his new comrades, Balthier and Fran, must escape the dungeons after being locked in upon being discovered trespassing in the Royal Palace of Rabanastre. Fran, being a viera, senses a way out, but the way deeper into the fortress is blocked off.

A Judge enters the dungeons and the group decides to follow him. They follow the Judge to the bottom of the dungeons where Basch is kept locked in a private cage. The Judge confronts Basch, then leaves. Basch's cage hangs above a "bottomless pit", which is the way out Fran could sense. They cut Basch's cage loose from the ceiling causing the tunnel to collapse on itself and the group to fall through the pit to the Barheim Passage.

Following their escape from the dungeon into Barheim Passage, the Nalbina Dungeons can no longer be accessed.

The manga version expands on the events. When Vaan intervenes on a seeq prisoner attacking a former Dalmascan soldier, the Goddess's Magicite falls from Vaan's pocket and the seeq seizes it. Balthier tells Vaan he will teach him why he lost and challenges him to a game where Balthier will throw a coin into the air, catch it, and Vaan must decide which hand it is in.

Vaan fails, and Fran reveals she has the coin and Balthier's hands are empty. Meanwhile, Gabranth authorizes Ba'Gamnan to search the prisoners for Balthier. Fran reveals she has found the exit and used her magic to forge a duplicate key to the bindings that guard it. Balthier decides to make their move in two hours after investigating the resistance, and Vaan declares to have recovered the stone when he returns. He finds the seeq who stole it but is ambushed by two more.

Vaan is thrown into a cell until the seeq, Daguza, is ready to face him in the arena. Ba'Gamnan offers to free him, but Daguza intervenes and the two fight, and Vaan escapes and charges Daguza. In a flashback, Balthier explains to Vaan he won the coin flip using the magic spells Decoy and Vanish to distract Vaan, toss a fake coin while throwing the invisible real coin to Fran, and Vaan lost because he was too naive and didn't watch his surroundings. Vaan ignores Balthier's lesson and surprises Daguza with a frontal attack seizing the Goddess's Magicite, and flees to meet up with Balthier.

In the deepest layers of the prison Gabranth speaks to Basch, asking how he is kept alive and if he knows anything about the prisoner "Amalia" Emperor Gramis and Vayne are secretly transporting, suspecting information is being kept from him. When Gabranth leaves Balthier, Vaan and Fran investigate the pit below for an escape route, and when Vaan causes a clamor, the trio drop Basch's cage into the pit to escape. 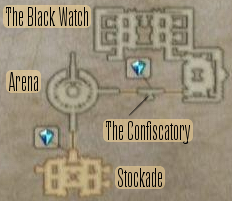 Vaan awakens in the Nalbina Dungeons, where he intervenes to stop the jailer Daguza and his lackeys from abusing a bangaa prisoner.

Entrance to the oubliette in the Dungeons.

Pit below the prison cage.

A prison cage in Nalbina Dungeons.