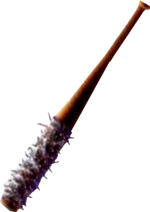 A bat with several nails protruding from it. Do not try this at home, children.

Nail Bat (釘バット, Kugi Batto?) is a recurring weapon in the Final Fantasy series. It is generally a mid-ranked weapon with high attack power. It originates as a joke weapon for Cloud Strife in Final Fantasy VII, and is thus classified as a greatsword despite not being a sword.

The Nail Bat is a mid-ranked weapon for Cloud that provides 70 Attack, 100 Attack%, Critical +4%, and has no Materia slots. It can be bought for 2,800 gil at Junon (after obtaining Highwind), and found in the Temple of the Ancients.

Nail Bat is a weapon for Cloud. It is the only weapon that alters Punisher Mode to make it appear as of Cloud is swinging in a baseball game. It eliminates what limited mobility Cloud had in Punisher Mode when attacking and reduces his range. As such, it is rather difficult to utilize the Nail Bat's version of Punisher Mode against an enemy that can move. The Nail Bat is obtained by helping the kids at the Sector 5 slums before settling for the night at Aerith's house; while most patroller kids of the Leaf House school have a wooden buster sword-style weapon on their backs, one kid has a nail bat.

The Nail Bat is one of Cloud's unlockable weapons, and is based on the weapon's appearance from Final Fantasy VII. This weapon was obtainable as an exclusive pre-order bonus when the "Day One Edition" version of the game was purchased from the PlayStation store. Like all other characters' weapons, equipping it offers no advantages or disadvantages.

A bat with several nails protruding from it. Do not try this at home, children.

A crude club with nails sticking out of it. It's more lethal that it looks and raises critical power.

A mysterious weapon brought from another world. This "bat" is apparently a stick used for a type of entertainment, and is covered with nails. It seems as if this weapon was enshrined in temples made by a race called the Ancients in the world from which it originated.

Nail Bat is a Mace obtained during the Final Fantasy VII event, Destroy the Reactor. It provides 115 ATK, +50% accuracy, has a damage range of 100-160%, and requires both hands to wield.

If the player's character is using the SOLDIER 1st Class job, one of the quotes he says is "I could have beaten them with a Nail Bat!" 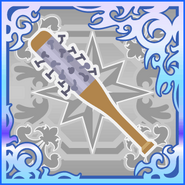 [view · edit · purge]A baseball bat is a smooth wooden or metal club used in baseball to hit the ball after it is thrown by the pitcher. Due to its bludgeoning nature, a baseball bat may be used as a club-like weapon. A nail bat is a modified baseball bat with sharp objects, typically nails, protruding from the broad end. Within the modern world, they are found on street gangs as a makeshift weapon, specifically on bikers and punks in western civilization; its inclusion as a part of the "Force of the Resolute" combination in Dissidia emphasizes this.