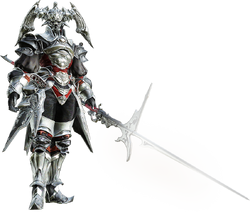 This land is for one thing... purification!... And for that I gladly offer up both body and soul.

Nael van Darnus (ネール・ヴァン・ダーナス, Nēru van Dānasu?), born Eula Darnus, also known as The White Raven (白銀の凶鳥, Hakugin no Magatori?, lit. The Silver Harbinger of Birds), is the main antagonist of the original Final Fantasy XIV storyline. Disguised as her late brother, she acts as The Legatus of the VIIth Legion dispatched to the western front, and boasts a distinguished parentage in her late father, a founding figure of the Garlean Empire, and a descendent of the Allagans.

She carries a gunhalberd named Bradamante, said to be named after a warrior maiden she had killed. In truth it is named for the real Nael's fiancée, who impaled herself on the weapon after his death.

In the original Final Fantasy XIV, Darnus wore silver full-body armor styled after Near and Middle Eastern clothing and armor, with a horned skull-like helmet concealing her face. Nael's more notable feature is the Garlean Third eye on her forehead.

Feeling that the empire's invasion of Eorzea is of divine intervention to save its people from their pagan ideals, Darnus is ruthless and rose to infamy even among her own people. As she sees them as fools, Darnus draws no distinction between friend and enemy when met with opposition. When Darnus rose to power after the death of her ill father, who she actually assassinated, she had her father's closest aides executed soon after his burial. Despite these dark rumors, the battle prowess of Darnus and the VII Legion is such that, even though they have spent long years in active service, the Empire has deemed them too valuable to retire from the frontlines. During her operations Nael displays a liking for the theatrical while in the presence of the adventurer, using grand gestures while talking to those she views as below her.

Nael's gender was treated differently depending on the language. In the Japanese version, the lack of voice acting and gendered pronouns left Nael's gender a mystery that wasn't revealed until she removed her mask in A Realm Reborn.

The English version, however, was forced to use gendered pronouns and the localization team chose to use male terms. This made her reveal as a woman a bizarre twist that went unexplained until the reveal of her identity as Eula Darnus nearly two years later.

Being one of the Garlean Legatus, Nael is one of the Empire's most accomplished warriors. She is a skilled Lancer, having access to two of its strongest Weapon Skills. Her gunhalberd can drain the aether from an aetherial node, and shoot it as high energy beam. Darnus is also capable of short range teleportation without needing to attune with an Aetheryte.

After being powered by Dalamud, Darnus gained the ability to absorb other beings' life energy and to animate stone golems. During the final battle, she could alter the aether flux around the Rivenroad to capture small fragments of Dalamud and attract them to it as small meteors, and by activating the ruins' magicked glyphs, she also gained the ability to unleash a devastating energy beam over the entire area.

Born Eula Darnus, she was the eldest daughter of the House Darnus and the heir to her family's secrets—secrets of the Allagan Empire. She dreamt of becoming a chirurgeon, a regular position of a Garlean lady of her parentage. She followed her elder brother, Nael into the army. Her dream died when he returned home, mortally wounded on what he claimed to be an ill-conceived mission their father ordered. Despite her efforts, she was unable to save her brother and stricken with grief, she assassinated her father, making it appear as if he perished to a disease. She started to pose as her brother and became the legatus in his stead. The first thing "Nael" did was execute their father's officers and guard, making her transformation into Nael complete.

Darnus had been appearing at some camps to warn adventurers about false prophets. She met the adventurer as Ifrit was defeated, asking for the name of one who was victorious over a primal. After claiming the changes on Dalamud were of imperial doing for the land's betterment, Darnus saw the adventurer and their party were not interested in joining her cause. She drained a close aetherial gate using Bradamante and shot its energy towards the party, destroying the gate.

In a later quest, the adventurer could use the echo to view the past of a Gridanian soldier, whom Darnus silenced for eavesdropping in a conversation between herself and Gaius Van Baelsar. In that dialogue, Darnus attempted to convince Gaius that conquering Eorzea was not enough to stop the primals; the forbidden Allagan magic Meteor should be cast upon the land to purge them. Gaius initially disagreed due to the unpredictable nature of Dalamud, until Darnus claimed she can find the three tomestones needed to fully control the Meteor spell.

In the aftermath of Garuda's defeat, Darnus revealed the deaths of the primals were the key to access Dalamud's power, while telling the adventurer that she will let them live long enough to destroy the other primals for her.

Soon after, the construction of Castrum Novum was finished, and the lunar transmitter needed to call Dalamud upon Eorzea placed inside it and activated to bring down Meteor. Due to the efforts of the Grand Companies of Eorzea and several adventurers, the device was destroyed.

Filled with rage, Nael defeated the group and was engulfed in a red light, which she claimed to be the power of Dalamud itself. She continued her attack, leaving the adventurer group wounded before walking way, saying she still has the means to purify Eorzea with the powers of Dalamud.

Not long after, the companies tracked down Nael's location to nearby Allagan ruins in Camp Glory. An attack group was assembled and sent to the region, only to find the Rivenroad. Using the floating island as an altar, Nael sent fiery rocks raining from Dalamud to the countryside before the party arrived on the Enterprise.

Losing a fierce battle, hoping to use the party as sacrificial offerings, Nael resorted to bathing in Dalamud's light for more power, losing what was left of her mind and becoming a being of pure hatred and destruction. Finally defeated, Darnus's body became pure energy and disappeared into wisps of light with her gunhalbred remaining. Her essence ended up in the possession of Bahamut, and was recreated within the Binding Coil of Bahamut as a guardian.

Despite her defeat, the efforts of the adventurers who defeated Darnus were in vain as the wide-spread destruction caused by Bahamut's release reshaped much of Eorzea. Darnus's gunhalberd was believed to be intact, and remains in the possession of Gilgamesh, but the one he originally held was stolen by what Gilgamesh described as "the demon bird." He later finds the fake copy which Inspector Hildibrand Manderville claimed to own, but realized this was a copy when he first used it in battle.

The Binding Coil of Bahamut

During the adventurer's assistance in Alisaie's investigation in the first part of the Binding Coil of Bahamut, they see what appeared to be Darnus making a brief appearance alongside Louisoix as they were observing the head of Bahamut together, but the figure seems to go unnoticed by Alisaie.

The Second Coil of Bahamut

When the adventurer and Alisaie arrive in the Outer Coil, they encounter Nael Van Darnus waiting behind the entrance gate. Nael approaches and reveals the original Nael Van Darnus perished upon the eve of the Calamity, and that her body is nothing but a shell Bahamut put his influence into, naming her Nael deus Darnus. Deus Darnus warns the party that should they venture deeper in the Second Coil, they will have to answer to her. After doing so, Nael jumps off the ledge of the entrance and disappears into the depths of the dungeon.

Upon arriving to the Holocharts, Alisaie and the adventurer find themselves in an the Riven Road where deus Darnus awaits them. Telling them that their presence is an insult to her original self's resting place, deus Darnus threatens to kill them before Alisaie knocks the Legatus's helmet off with a ruin spell, revealing a white-haired woman bearing the Garlemald birthmark. Deus Darnus is revealed to be what remained of the original Darnus after a fraction her essence was recovered by Bahamut, and used to create an artificial being in Darnus's likeness with elements from her memory. In maddened glee, deus Darnus transforms into a dragon-like monster and summons Bradamante before being defeated by the adventurer.

Following her defeat Nael rises to her feet, regains her sanity, and while confused about her current state, ultimately accepts she was enslaved by Bahamut. Cursing her weakness for succumbing to the very power she had been trying to purge from the world, she makes it clear that Project Meteor had been solely her idea. Once Alisaie introduces herself as Louisoix's granddaughter, much to her surprise, she warns her that unless she were to steel herself, and her resolve for the harsh truth that awaited her, that she would crumble under the weight of her own despair as Nael did as a child. Louisoix slays Nael with a spear of light and in her final moments Nael sees an image of Dalamud, the symbol of the plan that ultimately cost her her life, but still marvels at its beauty.

Nael Van Darnus has her own leitmotif, "Meteor", most notably played during her conversation with Gaius Van Baelsar, and again when she injures the player upon the Lunar Transmitter's destruction. This theme reprises for her appearance in the Second Coil of Bahamut - Turn 2.

She also has two battle themes, each played during a stage of the final battle against her. "Tempest" is a rock-like variation of her theme, played during the first stage of the battle. "Rise of the White Raven" is the theme of the second stage of the battle, played after she loses her sanity from absorbing too much of Dalamud's power and becomes Nael Deus Darnus. Both of these themes reappear when the player engages Nael Deus Darnus in the Second Coil of Bahamut in A Realm Reborn.

Nael appears with a dark-elemental card depicting her official render.

Nael appears as a card in Triple Triad in the version playable via Final Fantasy Portal App.

"Nael" is a name of Arabic origin meaning "triumph". "Van" is based on German word von which means "from", but is also used to show that someone is a member of a noble family. Van is also the Dutch word for "from".

Retrieved from "https://finalfantasy.fandom.com/wiki/Nael_van_Darnus?oldid=2714784"
Community content is available under CC-BY-SA unless otherwise noted.