The young, stoic Nacht was orphaned in a recent war and taken prisoner in Harmonia, a northern island to which spring never comes. These recent experiences have only hardened his already tough exterior, with his face as cold as rock and lips tighter than a banker's vault.

Nacht is a young man in Final Fantasy Dimensions, who became one of the four Warriors of Darkness, as chosen by the crystal of Lux. Nacht's cold personality and tight lips cast him as uncaring, but his passion for defending others has helped lead the Warriors of Darkness in their quest against the Avalon Empire.

A young man held in Harmonia. Lost his parents in the war. A man of few words and no emotion.

Nacht has mid-length teal hair and blue eyes. He wears a midnight blue half-cloak held with a silver clasp over pauldrons and a studded blue tunic, shirt and trousers. Metal greaves extend up to his thighs. When he changes class, his dominant color is a dark blue.

Nacht is a quiet person, but when he speaks, his voice is all business, as he doesn't like the joking mannerisms of Alba and tends to be short with Glaive.

Nacht's father, Sigurd, was a knight in service of the kingdom of Falgabard. During an attack, Sigurd ordered his friend Graham to look out for his son, and help him escape. The loss of his family, and what later was revealed to be his entire homeland, turned Nacht into the cold, distant boy he is today. Nacht struggles with the issues of losing his father, resulting in Alba insultingly saying he has a "daddy complex".

Nacht is the son of a dark knight named Sigurd, hailing from Falgabard. When the empire assaulted their homeland, Sigurd asked his friend, Graham, to take care of his son before going to war. Nacht escaped from the castle and Graham never saw him again.

After a long time, Nacht meets the twins, Dusk and Alba, in the wintry town of Harmonia. He is called by Cid to board his airship for a mission, and meets his third companion, the prisoner Sarah. Cid asks them to go to the Crystal Temple to steal it from Lux.

When they arrive at the top, they meet Sol and his friends, who happened to be fighting the Watchbeast, and when the crystal suffers from too much stress, it shatters. Nacht wakes up in one side of the temple, where he finds Alba, Glaive, and Diana. They leave the Crystal Temple, but find themselves trapped in the World of Darkness.

The group finds a sunken ship, and sail to Mt. Verde. When they reach the summit they see a distant view of the World Tree, Yggdrasil. Upon climbing down they reach Verde, a small town near a forest hut where an old man lives. The locals warn the group to not to go near the Mazewood, as the people who went there got lost and never came back.

After failing the boy's father, Graham came back in death as an animated suit of Sigurd's armor to protect and guide Nacht in the Warriors of Darkness's journey in Falgabard. Graham's soul merges with the dark sword Nacht carries, allowing Graham to give the Warriors of Darkness advice and comfort, and guide Nacht in his personal quarrels with the loss of his family and homeland. Graham comments toward the end of theit adventure that Nacht is "becoming more like his father everyday" when Nacht tells Graham he is ready to take the fight to Avalon's doorstep.

Nacht does not get close to the other members of the party, though he is quick to defend others and swears revenge for not only his father, but for the deaths of Gramps and all those lost in Falgabard. When finally meeting Sol he comments that he didn't imagine to ever meet him again after their confrontation in the Crystal Temple. When both the Warriors of Light and Darkness team up, Nacht is with Graham at the rear of the parties' airship, alone, not communicating with the rest.

After the adventure, Nacht travels the world, seeking displaced members of his homeland and paying respect to his father and letting go of his loss. While the others hoped he would come to Burtgang for Sarah's crowning ceremony, he only arrives at a mountainside above the kingdom. The final scene during the credit roll, however, shows him arriving last in the crowning ceremony.

Nacht's stats lean towards the physical side, with his speed being the highest of his stats, which can benefit jobs such as Ninja and Thief. However, since the stat differences between characters are minimal, and abilities and equipment are of greater importance, he can competently do any job. Jobs also gain stat boosts when leveling up, which helps evening out stats.

Nacht begins with the Flee ability, allowing him and his accompanying party members to flee from battle. It takes up one of the four available ability slots. He joins with a iron sword, bronze shield, bronze helm, and bronze armor. 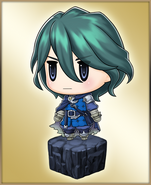 Nacht with Sarah and the twins.

Nacht as a Dark Knight.

Nacht and the Dark Knight, Graham.

Nacht means "night" in German and Dutch, playing on his role as a Warrior of Darkness, and as a stark contrast to Sol.