Cid Pollendina: Oh, shut up and help me remodel the Nabreus Deadlands page!
Please expand this article into a full one. The following tasks need to be completed:

The Nabreus Deadlands is an optional location in the land of Ivalice in Final Fantasy XII. It is a Mist-thick wetlands area north of the Salikawood.

The player must come to the Deadlands to complete the three medallions sidequest to get the Esper Chaos.

Place once known as Nabudis, the prosperous capital of Nabradia. In the war against Archadia two years ago, the city was utterly destroyed, leaving nothing but an eerie waste of swirling Mist. Even by day, the sun does not penetrate that ever present fog. Beneath it, dense Mist has given rise to all manner of bizarre flora and fauna of an invariably vicious temperament.

In the original version, the most common item treasure in the area is some type of Fang. With the Diamond Armlet equipped the common item treasure is Knot of Rust, and the rare item treasure is X-Potion. In the southwest corner of Vale of Lingering Sorrow a random treasure may contain the Golden Amulet. The southernmost treasure in the Echoes of the Past area can have an Elixir, which is a rare occurrence of an Elixir treasure without the need to equip the Diamond Armlet. This treasure is good for farming because it spawns 80% of the time, and has only 15% chance to contain gil. A treasure in the middle of the northern area of the Slumbermead may have the Nishijin Belt. The treasure on the little "island" in the middle of the Lifeless Strand area can have the Gillie Boots.

The Zodiac versions have all new treasure coffers, but still keeping with the theme of consumable items. The Mythril Blade starter weapon that is not available in shops can be found in the Slumbermead, though more of as a curiosity than as a useful weapon to equip. The player can also find various ammunition. The Cross Scale measure can be found in the Field of the Fallen Lord.

Echoes of the Past[]

Field of the Fallen Lord[]

The Roblon is a Rank VI Mark whose hunt becomes available after felling Judge Bergan at Mt Bur-Omisace. Roblon can be found in the Overlooking Eternity area and is part of the Jovy sidequest in Nalbina. Roblon is in an area reached via a hidden path in the northwest part of The Slumbermead, concealed in the tall grass. Dead Bones keep on spawning as soon as the party enters the area, and keep spawning whenever the player visits the area, making it an efficient level grinding spot. The hunt is petitioned by Morgen in Nalbina Fortress.

To find the Arioch the player must have spoken to the "Huntmaster" in Phon Coast and defeated Thalassinon, which will trigger the start of the Rare Game quest. Arioch then has a 40% chance of appearing in the southeasternmost corner of the Slumbermead area.

Velelu will appear in The Fog Mutters if the HP of a party member drops below 20%. It usually spawns at the eastern end of the area toward the entrance to The Slumbermead.

The player must head northwest and search for a hidden path and at the end of the path there is a monument with the nu mou, and the player gets the Medallion of Bravery, Medallion of Love, and the Lustreless Medallion. These can be used to open sealed areas in the Necrohol of Nabudis.

The player can earn a blue bottle from the fishing minigame in Dalmasca Estersand and bring it to an overturned boat in Echoes of the Past area. It breaks and yields an X-Potion.

The map can be found in the northwest section of the Vale of Lingering Sorrow. 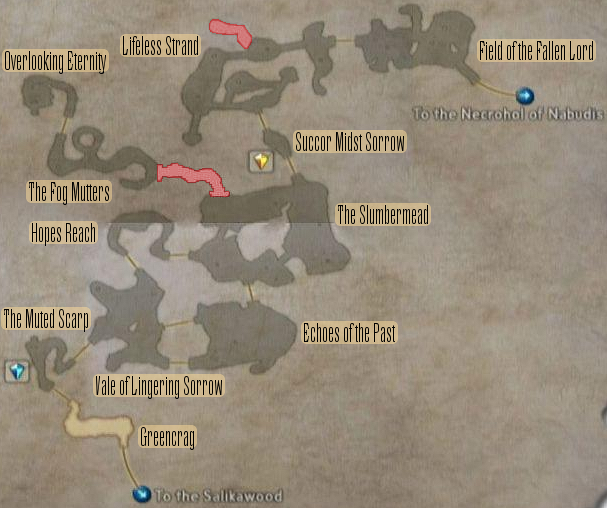 Map from the original Final Fantasy XII that contains all treasure information.

"A Land of Memories" in Final Fantasy XII

The theme of Nabreus Deadlands is called "A Land of Memories" (追憶の地, Tsuioku no chi?).