Fiercely territorial and short of temper, they have little compassion for pioneers who try to develop these primordial lands. As the Naakuals possess powers greater than many adventurers can even fathom, it stands to reason that the vast majority of layfolk dare not approach them. Even the most foolhardy or valiant of pioneers have yet to lay eyes on all seven.

During the time of the founder king, August Adoulin had fought with the Naakuals and subjugated them. He later tasked six of the Naakuals (the ones found in Wildskeeper Reives) to guard the entrances to Ra'Kaznar.

Most Naakuals appear in Final Fantasy Trading Card Game. The only one not represented on a card is Kumhau. 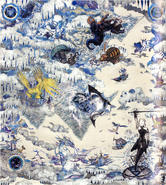 The Naakuals, as depicted in artwork by Yoshitaka Amano.
Final Fantasy XI
Community content is available under CC-BY-SA unless otherwise noted.
Advertisement