NORG, also known as Norg in Final Fantasy Record Keeper, is Balamb Garden's proprietor and the one running its finances. The Garden Faculty and his supporters refer to him as the Garden Master. He is a Shumi from the Shumi Village.

NORG is a large Shumi who has evolved into an elder-type Shumi rather than a Moomba. However, it is unknown if NORG has ever worked as an elder to Shumi. He is stout, has pale yellow skin, and like those of his brethren, a bulging chin and enormous hands. He dresses in a decorated robe.

NORG is a wealthy Shumi, but unlike his humble, good-natured brethren, NORG is vain, selfish, and cowardly. He ignores the Shumi custom of concealing hands, displaying his proudly, and is regarded as the tribe's "black sheep". His speech pattern is peculiar, speaking in a loud voice, occasionally making a "bujururu" noise.

NORG left Shumi Village to pursue a life of riches. It is unclear whether NORG was banished from the village, or if he left on his own accord. NORG came to possess a large fortune, and his meeting with Cid Kramer led to the Garden's establishment; at the time, Cid was seeking financial assistance, and NORG was interested and poured in his fortune to fund the project. To cover the Garden's expenses, NORG came up with the idea of hiring the SeeD out as mercenaries.

Cid, as the Garden's headmaster, ran the SeeD training, while NORG continued as the Garden's proprietor, responsible for its finances. Garden flourished and capital began flowing into the Garden's budget. The two began to drift apart as NORG was not interested in the SeeD's true goal and the Garden's original purpose (defeating a sorceress), and only cared about filling up his pockets with gold. Garden Faculty serves as NORG's authority within the Garden, enforcing rules and exerting pressure on Cid when needed.

After Sorceress Edea arises as Galbadia's ambassador, Garden aims to eliminate her. Cid sends out an order for SeeDs Squall Leonhart, Quistis Trepe, Zell Dincht, and Selphie Tilmitt to assassinate her, who had relocated to Galbadia Garden as per Garden Code that instructs SeeDs to report to the nearest Garden if returning to their own is not possible. Galbadia Garden's Master Martine supports Cid's order and provides the SeeDs with a sharpshooter from Galbadia Garden, Irvine Kinneas. The finer details of the plan are made by Galbadia's General Caraway, who also wants to remove the sorceress from power over concern for the direction of his country.

After the assassination attempt fails, the sorceress orders Balamb and Trabia Gardens destroyed while she takes Galbadia Garden for herself. NORG is furious Balamb Garden was involved in the plan and tries to calm the sorceress's wrath by handing over the SeeDs involved in the assassination attempt to show the Garden's sincerity. Cid refuses and an all-out war breaks out between those who side with NORG, and those who side with the headmaster.

After losing the battle NORG has a meeting with Cid that ends with Cid leaving in a huff. NORG summons Squall and his party to his chambers to explain he is going to hand them over to Edea to save "his" Garden. He also divulges how Cid and Edea are actually married, shocking the party. NORG, driven by obsession and selfishness, attacks the SeeDs. Defeated and despairing, he closes himself away in a glowing cocoon-like form.

NORG isn't seen again after, but if the party visits NORG's chamber again later, they can meet a couple of Shumi who apologize for NORG's behavior and the "cocoon" is now broken. When visiting Fishermans Horizon for the first time, the boatman on Drunkman Alley wonders what NORG will evolve into, confusing Squall.

NORG is fought after Balamb Garden becomes mobile. He hides within his NORG Pod, and the party has to pry it open to fight him.

Shumi Tribe is a Triple Triad card used for playing the minigame and for turning into Gambler Spirit with Quezacotl's Card Mod. It is a rare outcome for successfully carding a T-Rexaur or a Grat. Though the card depicts NORG and is a Level 6 Boss Card, the card is called "Shumi Tribe".

The musical score "Heresy" plays during the conversation between NORG and Squall just before their battle.

Known as Norg, he appears as a boss in the final stage of Master Room in Balamb Garden - The SeeDs of Conflict Challenge Event. To defeat Norg, the player is required to damage Norg Pod, then aim for Norg himself, all while also attacking Left and Right Orbs as to avoid their powerful magic attacks. The Target Score associated with Norg requires completing the battle without getting KO'd. 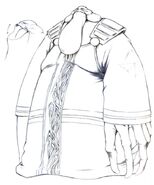