It's a stupid acronym. Their little code. Stands for 'No Obligations, Rules, or Authority'.

A vigilante group created by Snow, they strive to live a life of freedom and independence. After the fall of Cocoon, they moved to Gran Pulse with the people of Bodhum and created a new town—New Bodhum. They taught the former Cocoon residents how to live off the land and fend for themselves, and the townspeople greatly rely on them.

The paramilitary organization known as NORA is a group composed of like-minded youths, assembled by Snow and self-funded by the operation of a seaside café in Bodhum.

Functioning as a neighborhood watch of sorts, NORA members patrol the vicinity of Bodhum for trouble. Most often, "trouble" consists of encroachment by dangerous forms of wildlife.

NORA had never openly acted out against the Sanctum prior to the Purge, and because of this, the military had been content to turn a blind eye to the group's activities.

NORA is a vigilante group of young do-gooders from the Cocoon town of Bodhum. No strangers to fending for themselves, the group went on to found the settlement of New Bodhum in the harsh environment of Pulse.

Snow, NORA's founding member, is presently away from New Bodhum.

This section in section is empty or needs to be expanded. You can help the Final Fantasy Wiki by expanding it.

The team was originally founded by a group of youths from Bodhum, a port city on the outskirts of Cocoon, under Snow Villiers. The other members are Gadot, Lebreau, Maqui, and Yuj. They manage operations from a beach bar initially working to battle the monsters around the city.

The Sanctum deems the village population contaminated by Pulse and carries out a mass-Purging, provoking NORA to fight back. NORA leads the resistance against PSICOM forces and saves many Purgees, but the group's leader, Snow Villiers, has his eyes on the Pulse Vestige, where his fiancée Serah Farron is held captive. Snow gathers volunteers from among the Purgees to join the fight and provides them with firearms, but the bridge where his group is stationed is blown apart by PSICOM. After failing to save a woman who asks him to get her son home, Snow returns to the rest of NORA alone and sets out to the Pulse Vestige on an airbike.

Later when Eden is under attack from Pulsian monsters, they run into Snow and his friends. Snow is now a Pulse l'Cie bent on defying his Focus, and NORA scolds him for abandoning them and tell him they will support him no matter if he has become a l'Cie. Snow tasks NORA with evacuating the citizens and sets off to the heart of Eden.

Amid the battle in the Hanging Edge, Aoede, a journalist who put herself undercover and joined the Purge, believing it to be a scam, to obtain secret footage with her hidden cameras and make a report to further her career, deboards the Purge train and learns the awful truth. She can only stand in a daze and watch the carnage upon realizing her foolishness for plunging herself into the situation. An attack vessel locks on to Aoede but, just before the pilot fires, she is saved by Yuj and she escapes with NORA. As the Sanctum Skyfleet airship, the Palamecia brings the Pulse Vestige into the area, NORA gives Aoede permission to accompany them. Then the group helps her and other surviving Purgees escape the battlefield and take refuge in a crevice in the ground. After breaking through PSICOM's defenses, NORA, Aoede, and a portion of the surviving Purgees escape the Hanging Edge and hide inside an ancient Pulsian building inserted between the layers of Cocoon's outer shell during its construction, a large vestige that "shouldn't" exist and the perfect place for the Purge survivors to lay low and wait out the army's search efforts. Gadot leads a combat team to ensure everyone's safety and food and supplies are sent through Lenora's Garage, a shop maintained by Maqui.

Aoede continues to record everything as the footage could persuade the people of Cocoon to turn against the Sanctum and the fal'Cie. She believes NORA's way of life, refusing the charity of the fal'Cie and looking after themselves, would be the key to help guide the people into a new era as they have been able to protect people and provide for them by using their smarts and resources. By hacking the Sanctum's information channels through his network, Maqui taps into a live feed and projects a hologram of a broadcast from Palumpolum being captured by a military surveillance camera that depicts a plaza turned into a warzone as an ice pillar conjured by magic freezes everything and a Pulse l'Cie that NORA recognizes as Snow. Having been worried about Snow since the Pulse Vestige plummeted into Lake Bresha, the news of his survival brings relief to NORA. Aoede sees all that matters to them is that Snow is alive, not that he was made a l'Cie.

The footage from Palumpolum cuts off and NORA begins planning their next step as Snow's appearance was the sign they needed. Aoede knows Snow is going to take the fight to the Sanctum and NORA most likely wants to build a resistance movement to help him. As the Sanctum's troops are likely concentrated around Palumpolum, leaving holes in the security around the Hanging Edge, NORA and the refugees would be able to escape. Aoede decides to accompany NORA and capture more footage of their quest. After leaving some instructions with the remaining NORA members, they leave their shelter and set out for Eden, the capital of Cocoon and the Sanctum's seat of power.

Days later in Eden, as a girl named René sneaks into the Primarch's office after the Cavalry's coup and formulates a plan to save Cocoon with the gravity system with help from an illusion of Cid Raines within cyberspace. While using the Primarch's terminal, an illegal report is being broadcast throughout Cocoon featuring Aoede's footage of the Purge with her addressing the public. She reveals the truth about the massacre, the fal'Cie's motives, and how the Pulse l'Cie are trying to save everyone. Noting the hacking skills being impressive enough to bypass the fal'Cie that controls the airwaves, René has Raines monitor its progress and as the control code numbers on-screen rapidly change, the pattern feels familiar to René. She unconsciously enters the next code in the pattern and contacts the hacker, whose face appears on the monitor through a cross-connected feed. It is Maqui, whom René recognizes from junior school and who in turn recognizes René. She gives Maqui a rundown of the current situation and sends him a text file containing instructions for her control program along with the Primarch's passcode from Raines.

She tells Maqui to inform everyone to find shelter at the nearest gravity control facility. NORA's illegal broadcast garners unchallenged support from the public and the army for the group as well as the l'Cie. PSICOM director, Lieutenant Yaag Rosch, suspends all l'Cie hunting operations and orders everyone to focus on evacuating civilians. NORA incorporates Rosch's final order into their illegal broadcast, and everyone, ranging from the stubborn skeptics to the Sanctum's forces, begins taking steps to ensure their survival and trusting the Pulse l'Cie to make a miracle happen.

With network security at its weakest as the fal'Cie Eden uses all its power to manifest Orphan's Cradle when the l'Cie reach the Edenhall Reliquary, Maqui disables all safeguards, hacks into the gravity control system, and begins installing René's program, giving them full control. Bodhum has been removed from the network by the fal'Cie since the town was emptied by the Purge, and nearly a thousand people, including NORA's allies and the Purge survivors, are now hiding out there. Maqui can't get Bodhum back on the network, so René resolves to go there, use the universal unlocking device she obtained from a former fal'Cie pursuer to open the facility and install her program directly. René leaves the rest to Maqui, tells him to continue preparations, and to wait for Snow to pull off his miracle. René hears another familiar voice come through a voice-only transmission—Lebreau, who's been like a big sister to René since she was a child. Lebreau invites René to hang out with NORA and see how her cooking skills have improved when everything is over since Gadot, Yuj, and Snow have worried about her ever since she left the orphanage. Hearing Lebreau and talking to her old friends, a teary-eyed René promises to be there.

When Cocoon falls from the sky, Ragnarok rises to save it by crystallizing it and building a crystal pillar to support the structure above Gran Pulse. After Cocoon is saved, Aoede meets and interviews René on Gran Pulse before running over to where NORA and others are setting up camp to get more footage.

After the Catastrophe, many of the former Cocoon citizens settle on Gran Pulse, including those from Bodhum since the town was destroyed when Eden crashed down onto it. In the next two years, NORA and the Cavalry build the coastal town of New Bodhum, where the survivors take up residence. NORA helps the locals adapt to life on Pulse and resumes its original purpose of protecting the town from the hostile wildlife. The team is broken up when Snow sets out to look for Serah's sister, Lightning, who disappeared after the Catastrophe, and a year goes by with no word from him.

One day, a crystalline meteorite crashes on the outskirts and mysterious monsters attack the village. Serah finds herself in a paradox and meets a man who claims to bring a message from Lightning, who now resides in Valhalla. NORA remains skeptical of the man's claims to hail from the distant future and confront him, but Noel stands his ground. After revealing the meteorite is a Time Gate, NORA finally believes his story, and Noel and Serah set out on their journey through time to find a way to Valhalla and reunite with Snow and Lightning.

Using the Time Gate, Serah and Noel can keep returning to New Bodhum and meet with NORA. The first time they do so Gadot marvels how they had barely left before returning. If Serah and Noel visit New Bodhum 3 AF after opening the Time Gate to Academia 500 AF, NORA says they sense the pair's final battle looms near and wish them the best of luck. As the formation of Nova Chrysalia occurs centuries after NORA members' presumed natural deaths, the group's fate is left unknown.

Like the rest of humanity, the souls of NORA members found their way to the new world where they were reincarnated and established the "Nora House" restaurant. They are visited by Aoede, who is investigating the stories of people having memories of a past life in another world. Upon her tasting the Nora Special, both the NORA group and Aoede remember their previous meeting on Cocoon when they exposed the Sanctum by airing Purge footage via Maqui hacking the broadcast. Soon after, Lebreau tells Aoede where she can find Serah.

The music that accompany NORA in their appearances are called "The Warpath Home" (帰るための戦い, Kaeru Tameno Tatakai?) played prominently at the Hanging Edge, and "Snow's Theme" that plays whenever Snow leads the party members. 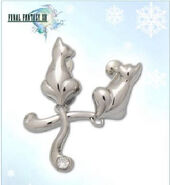 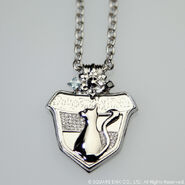 Lebreau and Yuj during the Siege of Eden.

Gadot and Marqui during the Siege of Eden.

In the Japanese version, the term "Nora" is said to be a play on the Japanese word for "stray cat" (野良猫, noraneko?). This theme is evident in some of the jewelry sported by the cast, including Snow's necklace and Serah's earrings (which both have cats pictured on them). In the English version, NORA is an acronym standing for "No Obligations, Rules, or Authority".