Saber made of processed mythril ore.

Mythril Saber (ミスリルセイバー, Misuriru Seibā?) is a recurring sword in the series. It is part of the mythril equipment set.

Mythril Saber is the second weakest weapon for Cloud, providing 23 Attack, 98 Atk%, 4 Magic, as well one unlinked materia slot and one linked materia slot at normal growth. It can be bought for 1,000 gil at Kalm and Junon (before obtaining the Highwind).

Attack Power bonus is on the lower end. The weapon can be purchased from the Wall Market weapon shop during Chapter 14, "In Search of Hope".

Mythril Saber is a low-ranked saber that provides 32 Attack, +1 Jump, and teaches Blue Combo to Blue Mages for 100 AP.

Mythril Saber is a weapon for Queen. It provides 32 Attack Power and +10 to all Magic. It is bought from Amiter for 9,000 gil.

A great sword made of precious mythril. Its width and length do not differ from that of any other great sword, but the mythril that composes it makes this sword incredibly light. Although swinging it requires as much strength as handling a one-handed sword, a great deal of expertise is required to become accustomed to its reach. Thus, the mythril saber is best left for those veterans who know how to counterbalance its unique characteristics.

Mythril Saber is a Great Sword obtained by buying it for 4,500 gil at Underworld Gaberada, by crafting it using 900 gil, x16 Mythril Ores, and x1 Broken Blade, by completing the quest Invasion Afoot!, from the Final Fantasy III event, The Crystal Tower, and from a Premium Bundle. It provides 45 ATK. 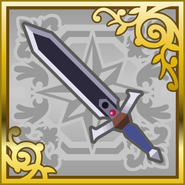 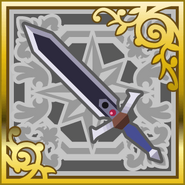