Republic of Bastok
The Mythril Musketeers are the elite guards of Bastok from Final Fantasy XI. They are hand-picked from the finest soldiers and only obey orders personally issued by the President. 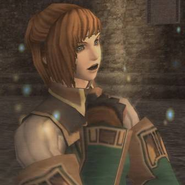 [view · edit · purge]A musket is a muzzle-loaded, smoothbore firearm, fired from the shoulder. Muskets were designed for use by infantry. A soldier armed with a musket had the designation "musketeer".