The Mythril Mines are a location in Final Fantasy III. They are located nearby Kazus, where an entrance to them can be found. They are not part of the main storyline. Two Mythril Swords can be found in chests behind a hidden passage opened by activating a secret switch. The switch, however, can only be triggered after the party has defeated Djinn in the Sealed Cave.

The background music that plays inside the Mythril Mines is the "Dungeons" track. 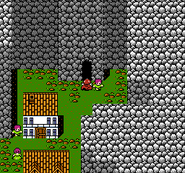 Entrance to the Mythril Mines (NES).