Cid Pollendina: Oh, shut up and help me remodel the Mythril Mine (Final Fantasy VII) page!
Please expand this article into a full one. The following tasks need to be completed:

The Mythril Mine is a short dungeon in Final Fantasy VII where townsfolk from Kalm used to work before the appearances of Midgar Zolom stopped the mining expeditions. Despite being called "Mythril" Mines, the mines are referred to as "coal mines" by a miner in the Kalm bar in the game's PlayStation translation, contrary to the original Japanese release that never stated this. In the PC version the word "coal" has been removed. The weapon shop of Kalm, where the miners reside, sells weapons made of mythril.

The mines penetrate the mountain range in the eastern continent, connecting the Chocobo Farm in the Grasslands Area to Fort Condor and Junon in the Junon Area.

In Crisis Core -Final Fantasy VII- the Mythril Mine does not appear as a location, but has a shop visitable from the menu as Mythril Mine Trading.

The party goes through the mines while following Sephiroth's trail during their world-wide hunt for him. Outside, they find a Midgar Zolom impaled on a tree, speculating the feat was accomplished by Sephiroth who left its corpse there as a warning.

Inside the mines, the party meets the Turks: Rude, Tseng, and the rookie Elena. The Turks do not attack, only warn that Reno will be back with a new weapon to fight them soon. Elena slips that Sephiroth has been sighted heading towards Junon, and the parties part ways. Tseng talks to Aerith if she is currently with Cloud, and inquires about her well being if she is not.

The Mythril Mine is located to the South on Gaia's eastern continent.

The Mythril Mines are an excellent place to level up Limit Breaks early in the game. Enemy groups in the cliff edge have as many as five enemies. Using group attacks, like the Enemy Skill Matra Magic or magic with the All Materia, allows vast numbers of enemies to be defeated in a relatively short time.

"In Search of the Man in Black"

The background music for the Mythril Mine is "In Search of the Man in Black".

While attempting to get to Midgar, Zack Fair fights his way through a contingent of Shinra troops in the mine's abandoned facility/town. Eventually acquiring a motorcycle from one of the troops, he rides the bike into the mine tunnels, making it to the other end before the bike's fuel runs out.

The Mythril Mine is referenced in the Brain Blast quiz of Final Fantasy XIII-2. It is listed as an incorrect option for a question asking for the location of the Paddra Ruins.

If the player skipped Kalm, Cloud's party members stop him from going deeper into the mines, telling him to go back to Kalm. If the player crossed the marshes on a chocobo, Cloud asks his steed to wait for him outside, which normally can't be done.

If the player triggers the aforementioned scene and Aeris is in the party, she will use Tifa's dialogue because the developers accidentally assigned Aeris with the wrong text ID. The line Aeris is meant to say can never be seen in a normal play-through, although it still exists in the game's text files. 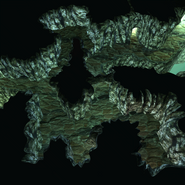 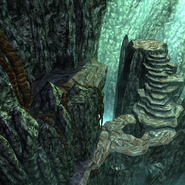 Cliff Edge.
Add a photo to this gallery