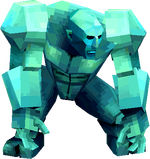 Mythril Golem (ミスリルゴーレム, Misuriru Gōremu?), also known as Iron Man, MtGolem or SilvGol, is a recurring Golem in the Final Fantasy. It is typically one of the strongest Golems, with higher HP and defensive stats, as well as stronger Strength stats.

Mythril Golem is fought in the Dawn of Souls, appearing in the Sky Castle areas of the Whisperwind Cove, on levels 31 and deeper. It has a high Defense and Magic Defense, as well as very strong physical attacks. Due to this, and its resistance to all elements, Flare is the best spell to use against it.

Mythril Golem is fought in Pandemonium. It is the strongest all Golems, due to its HP, Attack and Defense stats, which make the fight last very long. A high leveled Thunder or Blood Sword is advised.

Mythril Golem is fought in the Tower of Babil and Lunar Ruins. It typically drops mythril equipment, such as Mythril Armor. It has very high HP and Attack, but is susceptible to Paralyze from Rydia's whips.

Mythril Golem returns and its fought again in the Tower of Babil, and is similarly dangerous. Porom can use Hold in place of Rydia's paralysis, while Edge can steal Mythril Knife and throw them.

Mythril Golem returns and is fought in many different Challenge Dungeons. Its stats are very similar to previous incarnations.

Mythril Golem is a member of the Golem enemy family as a species.

Mythril Golem is fought in the Giruvegan and the Great Crystal. It has various magick abilities and very powerful stats.

Mythril Golem is fought in the Mysidia Caverns.