Thief dagger made of Mythril.

Mythril Dagger (ミスリルダガー, Misuriru Dagā?) is a recurring dagger in the Final Fantasy series. It is part of Mythril equipment sets.

Mythril Dagger is a low-ranked dagger for Zidane, which provides 18 Attack and teaches the ability Bandit. It can be bought for 950 gil in Lindblum, Treno, Black Mage Village, Madain Sari, Alexandria, Esto Gaza before Desert Palace, Daguerreo, and Bran Bal Mogshop, found in Treno in Doctor Tot's tower, and stolen from Sealion.

It can be bought for 7,813~8,671 gil from Torapiont in Selbina (J-9) or bought for 143 Sparks of Eminence from Isakoth in Bastok Markets (E-11), Rolandienne in Southern San d'Oria (G-10), Fhelm Jobeizat in Windurst Woods (J-10), and Eternal Flame in Western Adoulin (H-11). It can also be obtained from Fishing in Port Jeuno.

Mythril Daggers are a weapon for Rem Tokimiya. They provide 32 Attack Power and +10 to all Magic. They can be bought from Amiter for 9000 gil.

A double-edged dagger made of mythril which boasts flexibility and durability. Its battle power and incredible ease of use make it a formidable weapon, but the prized mythril used to forge it makes it a hard blade to acquire. No one surpasses the dwarves when it comes to superior mythril craftsmanship, which is why mythril daggers are mostly made in the Industrial City Dilmagia where many of them work.

Mythril Dagger is a dagger that can be bought for 500 gil at Town of Kolts, Aquapolis Olderion, Town of Amore, Raven's Hideaway, Downtown Zoldaad, Underworld Gaberada, and Town of Sian, crafted using 100 gil and x5 Mythril Ore, found during the Final Fantasy III event, "The Crystal Tower", and as the reward for completing the quest "Hammer Time". It provides 20 ATK.

A double-edged dagger with a blade forged from mythril steel from Eisenberg. Thanks to its extremely sharp blade, it has the potential to deal damage on par with an iron long sword.

IN Bravely Default, Mythril Dagger is a dagger that provides 15 P.ATK, 95 Aim, and 3 Critical. It can be bought for 700 pg at Yulyana Woods Needleworks and Miasma Woods, or found at the Temple of Wind.

In Bravely Second: End Layer, Mythril Dagger provides 15 P.ATK, 95 Aim, 3 Critical, and deals 50% more damage to beasts. It can be bought in Ancheim for 700 pg. 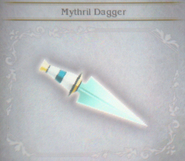 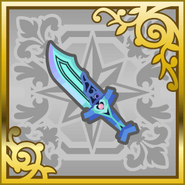 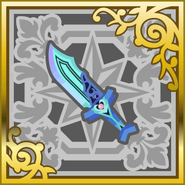