Armlet made of mythril.

Mythril Armlet (ミスリルの腕輪 or ミスリルのうでわ, Misuriru no Udewa?, lit. Mithril Bracelet), also known as Mythril Bracers, is a recurring armor in the series.

Mythril Bracers is a low-ranked arm armor that can be bought for 120 gil at Kazus and Canaan, or found in Tozus. It can be equipped by the Onion Knight, Freelancer, and all mage classes.

Mythril Armlet is a low-ranked armor that provides 18 Defense, 3 Def%, 8 Magic Defense, and one linked materia slot with normal growth. It is initially equipped on Red XIII, and can be bought for 350 gil at Wall Market, Junon, and Kalm, or dropped from Heli Gunner.

Mythril Armlet is a piece of armor with good stats and two linked materia slots. It provides +10 to

Magic Defense. Aerith joins the party with one equipped, and it is available to purchase from weapon shops after this point.

Mythril Armlet is a mid-ranked armlet that provides 17 Defense, 11 Magic Defense, +1 Spirit, and teaches Bug Killer. It can be bought for 500 gil at Cleyra, Lindblum (disc 2), Fossil Roo, Alexandria, Black Mage Village (disc 2/3), Daguerreo, Conde Petie, and Esto Gaza before the Desert Palace, or found at Pinnacle Rocks. Everyone except Steiner and Freya can equip it.

Mythril Armlet is an armor for Kimahri, obtainable if the dominant abilities on any armlet are any Defense+% and Magic Defense +% abilities.

An armlet from a distant world. Featuring two slots in the center, it seems that in its world of origin, this armlet was worn with various orbs of materia equipped to it. Materia is a condensed form of the mako energy lying dormant within the planet, which allows for the use of abilities such as magic when equipped to weapons or armor.

Mythril Armlet (FFFVII Remake) is an accessory that is obtained during the Final Fantasy VII Remake event, Chronicle Battle: The Valkyrie. It provides 5 DEF, 20 SPR, and SPR +20%. At +3, it provides 5 DEF, 30 MAG, 20 SPR, SPR +20%, and when equipped by a FFVII unit, increases magic damage against beasts and undeads by 50%. 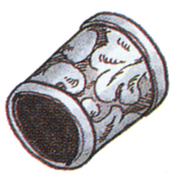