Mythril also known as Silvera, Village of Mithril or Mythril Village, is a remote town in Final Fantasy IV and Final Fantasy IV: The After Years situated north of Mount Ordeals.

Mythril is inhabited by Toads, Pigs, and Small People, who mine mythril from an unknown mine. Toads refine the mythril and small people process it and the pigs forge weapons out of the refined mythril. The Adamant Isle Grotto lies east of the city, and can only be accessed with a Hovercraft. No notable events occur here in the original game.

Mythril is the residence of the NPCs known as the Mythril Brothers. The trio consist of a toad, pig and a mini person. They offer to dance for the party.

Ceodore Harvey comes to the island for his Proof of Knighthood with the Red Wings. He spends the night there and he later goes to the Adamant Isle Grotto with Biggs and Wedge.

The background music that plays in Mythril is the Final Fantasy IV "Town Theme".

The shape of the island the town is situated on bears a vague resemblance to a pig's head. This detail is lost in 3D versions.

The DS version has a "bug" related to this town: the unusual size of its inhabitants makes talking to the shopkeepers nearly impossible, as one must perfectly line up with them on the angled separator, which pushes the player to either side if they try to orient themselves. This bug was fixed in the iOS version. 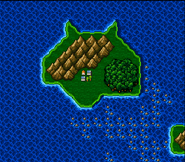 Mythril on the World Map.

Mythril on the World Map (DS).

Mythril on the World Map (GBA).

Mythril on the World Map in the Complete Collection version.

Render of a small father (DS/iOS).