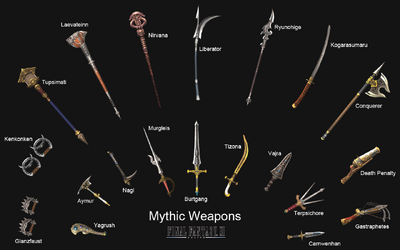 Mythic Weapons (ミシックウェポン, Mishikkū Wepon?), also known as "The Myriad Arms of Balrahn", are twenty weapons in Final Fantasy XI obtained through the "Arms of Balrahn" series of quests available once a player is promoted to Captain Mercenary Rank. The arms are rare and powerful weapons that were once part of Emperor Balrahn's personal collection.

The aftermath effect is split into 3 levels.

The initial level of a Mythic Weapon is 75, but various Magian Trials may be undertaken to improve the weapons, capable of being upgraded like the Empyrean Weapon to a final, elevated Level 99 Afterglow form. The Afterglow of all Mythic Weapons is a shimmering azure.