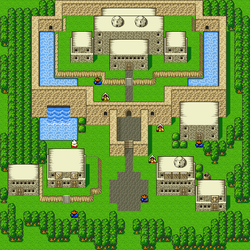 "Mystic Mysidia" (ミシディア国, Mishidia Koku?, lit. Country of Mysidia), also known as "Mysidia", is a background theme from in Final Fantasy IV named after the eponymous location. It features some peculiar elements not found in many town themes throughout the series, such as a fast tempo and the inclusion of a cuckoo bird's chirp within the rhythmic section. It was composed by Nobuo Uematsu.

"Mystic Mysidia" is the background theme for the town of Mysidia, and was released as the 25th track in the Original Sound Version.

"Mystic Mysidia" was rearranged by Kenichiro Fukui for the Nintendo DS release of Final Fantasy IV. This version was released as the first track of the second disc of the Final Fantasy IV Original Soundtrack.

This section about an album in Final Fantasy IV: The After Years is empty or needs to be expanded. You can help the Final Fantasy Wiki by expanding it.

From October 30 to November 6, 2015, a Halloween-themed remix of "Mystic Mysidia" replaced the normal music in the Realms menu.

A remix of "Mystic Mysidia" called ミシディア国 appears as the 4st track of disc 2 in the Chocobo to Mahou no Ehon Series Original Soundtrack, arranged by Yuzo Takahashi.

An arranged version of "Mystic Mysidia" utilizing strings and violin appears, as the 12th track in this album.