The Mystic Knight, also known as Sorcerer, is a job in Final Fantasy V obtained after the Water Crystal shatters. Mystic Knight uses elemental or status properties to augment their physical abilities, giving physical attackers an edge against their enemies. Mystic Knights boast the second highest Agility, and their Magic is slightly higher than the Freelancer's.

The Mystic Knight's Strength and Stamina lack behind other similar jobs, such as Knight and Dragoon. They can imbue their weapons with offensive spells the party has learned.

Mastering Mystic Knight for all four characters in the mobile and Steam versions earns the player the achievement "One Deadly Blow".

As a Mystic Knight, the character wears clothes similar to warriors from the Middle East, including turbans for the men and veils for the lower face for women. Lenna's costume is more revealing, resembling a belly dancer's attire. Krile seems to have a Hindu bindi. The male costumes resemble Minwu from Final Fantasy II.

Spellblade allows the Mystic Knight to charge their sword with a spell. Status effect charged blades will incur that status 100% of the time as long as the attack connects, and attack-charged blades will do powerful, defense-ignoring damage to enemies weak to that element (or in the case of the strongest abilities, even instantly kill any non-heavy enemy it hits), or just plain high damage to everything in the case of Flare Sword. The effect lasts until the end of battle. Magic Shell casts Shell automatically on the Mystic Knight when they are in HP Critical condition.

Thus, the base Strength and Magic stats for a character with Spellblade equipped are as follows:

The Spellblade abilities themselves also increase damage as follows:

When striking an enemy that resists, is immune to, or absorbs the element of the Spellblade, the damage will be reduced, nullified, or reversed, just like a magic spell.

Spellblade is part of the well-known combo, using it with Dual Wield and Rapid Fire.

Upon mastery, Freelancers and Mimes gain the Mystic Knight's base stats unless they already have a higher base from another mastered job. They will also gain Magic Shell as an innate support ability.

The job's innate command ability is the Spellblade. Leveling the Mystic Knight up allows other jobs to also use increasingly more powerful versions of the skillset. The Mystic Knight has Magic Shell as an innate support ability.

The Mystic Knight appears as a character card. 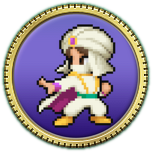