Ox
The Mystic Knight is a light-elemental Eidolon that appears in Final Fantasy Dimensions II. It is an optional summon that can be obtained as a signet for Aemo by purchasing her signet from the Babil Tower exchange shop for 50,000 Babil points after completing the Eureka arc.

The Mystic Knight is one of Aemo's strongest signets during the post game, providing her with a massive boost in attack, while offering balanced amounts for her other stats. While Holy Blade is not particularly useful for Aemo due to her lower attack power, its passive of reducing Aemo's MP costs in battle by 30% is the highlight of the signet. In addition, it is one of two Eidolons that has access to the Magic Blessing summon attack, which can be helpful if Aemo is used by the player to fight against end-game enemies such as Proto-Babil, which uses abilities that rend the party's MP to 1, making it the perfect counter-measure to recover the party's MP.

The Mystic Knight Eidolon is based on the recurring job class from the series, being a knight that uses swords enchanted with magic to fight their enemies. The design of the artwork depicts a female Mystic Knight in a see-through Arabic-themed outfit wielding a scimitar. The design also appears to take inspirations from Lenna's Mystic Knight outfit from Final Fantasy V, with her first outfit having a similar color-scheme to Lenna's SD artwork of the job by Kazuko Shibuya. The final version has the Mystic Knight's outfit change to include more elaborate golden decorations and her outfit's color scheme changes to magenta. In addition, she is standing above an enchantment rune in her final artwork.

The Mystic Knight's special attack is Magic Blessing, which restores 1/2 of max MP to all party members. Summoning theMystic Knight costs 2 bars from the Summon Gauge.

The following are the abilities Aemo can learn from the Mystic Knight: 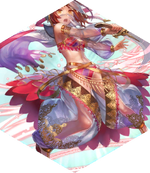 In the original free-to-play versions of the game, the Mystic Knight signet was a god-tier light summon that could only be obtained through the game's summon draw shop. It taught the same abilities as in the premium release. The Mystic Knight was an SSS rank summon and could be equipped by any party member.

In addition, a player that drew the Mystic Knight signet from the shop would also obtain a costume voucher redeemable for a Mystic Knight-themed costume for Aemo, Jornee, or Maina. 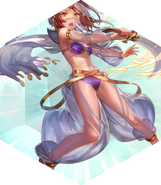 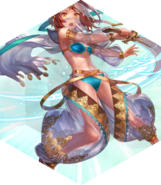 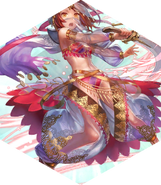 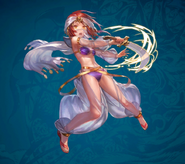 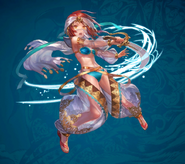 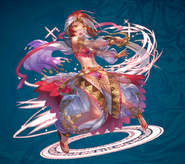