Mystic Knight (魔法剣士, Mahōkenshi?, lit. Magic Fencer), also known as Rune Fencer, Sorcerer, Spellblade or Spell Fencer, is a recurring job in the Final Fantasy series. Skilled in both magic and swordsmanship, they fuse both arts into Spellblade and are resistant to magic as a whole.

The Mystic Knight fuses magic spells which includes damaging spells or status inducing spells into their equipped sword. The wielder will smite enemies with their Spellblade.

Spellblade is a job exclusive to viera. They can use swords to strike enemies and their abilities consist on inflicting status effects while damaging.

Spell Fencers enchant their weapons with magic spells to deal more damage to their foes, and can also shield themselves from magic. Krinjh joins the player's party as a Spell Fencer.

The Mystic Knight appears in the form of a Job Card in the Duel Colosseum. Its effects make card luck easier to rise while it is selected.

The Mystic Knight card appears in the Labyrinth mode, but this time increases the chances of party cards appearing.

The Mystic Knight is also an advanced job that can be selected for a character in the player's party for Quick Battle, Friend Cards, or wireless matches. It is unlocked with the powers of the Black Mage and Dark Knight, and grants 50% damage reduction and 100% damage increase when the character is in critical health.

The Mystic Knight appears as a character card.

A cape, turban, and spell-imbued blade are the telltale signs of this swordmage.

The Mystic Knight is a character available to the party, he uses the Firaga Sword ability during battle. He unlocks at level 20.

A unique swordmaster who fights with a magic-imbued blade. The Spellblade is an impressive frontline warrior who uses his sword to unleash elemental magic and debuffs that exploit the weaknesses of his enemies.

Spellblade is a playable character who can be recruited as the First Time Reward for completing Calm Lands on Classic difficulty in FF X track of the game's Core Dungeons.

The Mystic Knight is strongly alluded to in Final Fantasy IX. Provided Vivi is in the party and not incapacitated, Steiner can use Sword Magic with Vivi's aid. Only the damaging Black Magic spells (e.g. Fire) can be used as Sword Magic, not status effect-inducing spells (e.g. Slow), and Vivi must know the spell in question. The attack uses Steiner's turn and MP, and does not affect Vivi's MP or ATB gauge. 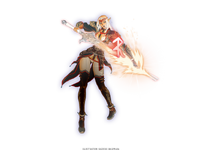 Rune Fencers are intended to use their damage-dealing capabilities to help draw the foe's attention and use their spells and special job abilities to mitigate magic damage. Their magical attacks and defenses have a strong elemental aspect, determined by which runes they are harboring at the time. Built-up harbored runes provide elemental attack and defense, and furthermore can be expended for various effects.

The player can only unlock Rune Fencer by purchasing the Seekers of Adoulin expansion and completing the unlocking quest line located in the expansion zones.

Aire as a Spell Fencer in Final Fantasy: The 4 Heroes of Light.

Agnès and Tiz as Spell Fencers in Bravely Default.